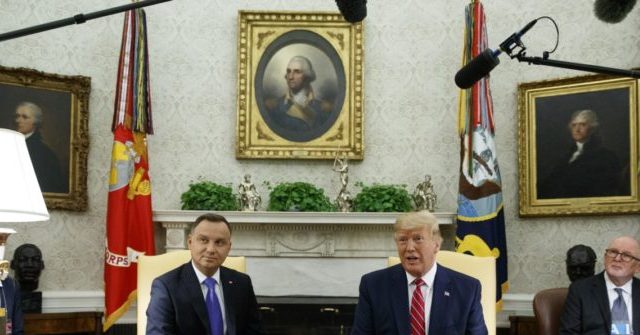 The two leaders held a midday bilateral meeting before an expanded working lunch and a joint signing ceremony. The two are then schedule for a joint press conference at 2:15pm.

A senior administration official previewed the visit on Tuesday with word that discussions will involve a high-level delegation and center primarily around matters of security. The goal is to deepen security partnership between the two nations in line with NATO goals and planning. The official emphasized that this falls in line with a pattern of meetings at a high-level with Central European leaders.

Poland was identified in Tuesday’s briefing as key as the nation has demonstrated a commitment to bearing the burden of their own security in the region, particularly meeting their two percent NATO defense spending goal.

The senior official described the meeting as historic, 80 years after the beginning of WWII, 30 years after communist rule in Poland, and 20 years since the nation joined NATO.

Acting Secretary of Defense Patrick Shanahan hosted his counterpart from Poland Tuesday at the Pentagon, according to one of the officials.