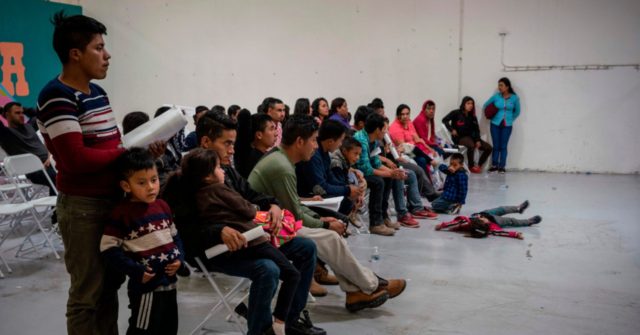 The mainstream media narrative about the conditions in the detention centers where children brought to the United States are being held are inhumane and dangerous is ongoing, including the claims of a human rights law professor who said she visited two of them recently.

National Public Radio (NPR interviewed Warren Binford, a professor at Willamette University in Salem, Oregon, who claims the center she visited had “incredibly unsanitary conditions” and that “almost all of [the chldren] are incredibly sad and being traumatized.”

“Many of them are sleeping on concrete floors, including infants, toddlers, preschoolers,” Binford said. “They are being given nothing but instant meals, Kool-Aid and cookies – many of them are sick.”

Binford then suggested she heard from sources other than the children.

“We are hearing that many of them are not sleeping,” Binford said. “Almost all of them are incredibly sad and being traumatized.”

“Many of them have not been given a shower for weeks,” Binford said. “Many of them are not being allowed to brush their teeth except for maybe once every ten days.”

“They have no access to soap,” Binford claimed. “It’s incredibly unsanitary conditions, and we’re very worried about the children’s health.”

Garcia-Navarro said Binford visited centers in Clint, Texas and in New Mexico and that the professor and others have been visiting these centers “for over 20 years.”

“And I asked her how this one compared,” Garcia-Navarro said. Binford replied:

This was, by far, the worst situation that I’ve seen not just by the conditions but by the sheer number of children who are being kept at this facility and being kept in really dangerous, unsanitary conditions. Literally, one of the children said that, currently, there are 100 children in his cell and that when he first arrived there, there were 300 children in the cell.

Binford said she saw no windows in the “warehouse” she visited and that children reported they don’t go outside often.

“They are worse than actual prison conditions,” Binford said. “It is inhumane.”

Binford said she spoke to NPR and other media to share the “extreme conditions” at the centers.

But according to a GoFundMe page, Binford started that has raised $83,000 to hire more people to “find and document separated children.” The team is being led by Peter Schey of the Center for Human Rights and Constitutional Law,” he said.

Garcia-Navarro asked about the Trump administration’s claim that those caring for the children on the border are “overwhelmed by the number of families and children coming into the United States.”

Federal officials estimate that the number of migrants coming into the United State will most likely be 1.28 million in 2019 alone.

“If you look at the historical numbers of immigrants coming to the United States, we are nowhere near the highest number of immigrants that we have coming to the United States,” Binford said, who claimed that 70 percent of the children have family or sponsors who can take them but that the federal government is “detaining these children unlawfully.”

Six children have died at the border, but those deaths were from medical conditions or diseases and not because of unsanitary living conditions.