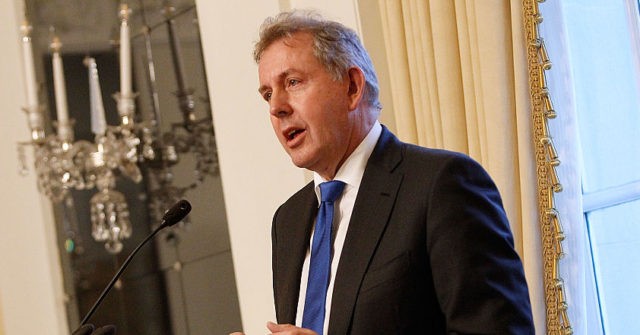 The controversial British Ambassador to the United States whose caustic remarks about President Donald Trump were leaked to the media at the weekend has resigned from his post.

Noting the enormous media storm generated around his remarks about President Trump and his administration, which he called “dysfunctional”, “clumsy”, and “incompetent” in a series of confidential briefing notes, Sir Kim resigned on Wednesday morning.

In a letter to his Foreign Office boss, Sir Kim said “the current situation is making it impossible for me to carry out my role as I would like”. The Foreign Office told Sir Kim he had acted with “dignity, professionalism and class”.

Responding to the resignation in Britain’s House of Commons Wednesday afternoon, Theresa May — to be replaced as Prime Minister this month — maintained her position of absolutely backing Sir Kim, thanking him for a “lifetime of service”. The Prime Minister also implied that the nation’s “values and principles” are “under pressure”, which is already being interpreted in the UK mainstream media as a further attack on President Trump.

Trump Says U.S. Will No Longer Deal with British Ambassador Who Disparaged His Administration https://t.co/HSWec4aFJt

I have spoken to Sir Kim Darroch. I told him it is a matter of great regret that he has felt it necessary to leave his position as ambassador in Washington. The whole cabinet rightly gave its full support to Sir Kim on Tuesday. Sir Kim has given a lifetime of service to the United Kingdom and we owe him an enormous debt of gratitude.

Good government depends on public servants being able to give full and frank advice. I want all our public servants to have the confidence to be able to do that, and I hope the house will reflect on the importance of defending our values and principles, particularly when they are under pressure.

Brexit leader Nigel Farage, who earlier called for Darroch’s resignation after his anti-Trump opinions became known, said Wednesday the resignation was the “right decision” and that he should be replaced by a diplomat who didn’t favour Britain remaining in the European Union, and who wanted to negotiate a good trade deal with the United States.

Sir Kim had been the target of some displeasure by President Trump since his remarks on the Presidency were leaked over the weekend. Breitbart London reported yesterday on the President calling Darroch a “wacky… pompous fool” who the United States would no longer deal with. This position was evidenced Tuesday by the ambassador being disinvited to a series of events, and a planned trade discussion between the U.S. and UK being cancelled altogether.