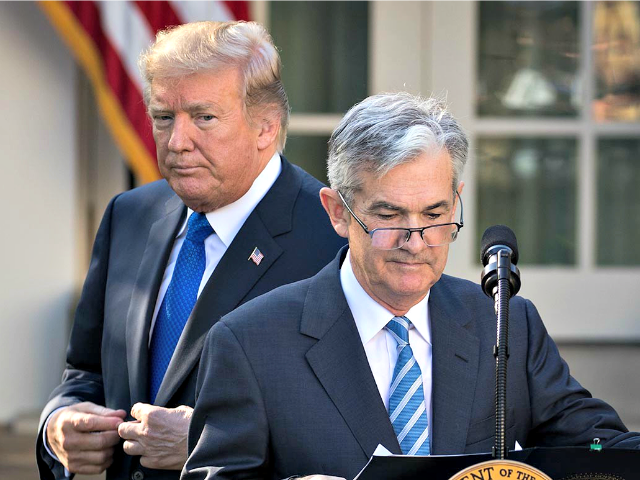 President Trump has a new, if reluctant, ally in the trade war with China: the Federal Reserve.

Federal Reserve Chairman Jerome Powell said on Wednesday that it was appropriate for the Fed to cut rates if concerns about trade and tariffs were slowing the economy. In his testimony to the House Financial Services committee, Powell strongly signaled that the Fed would likely lower interest rates in the months ahead in part because trade disputes and a slowing global economy have created clouds of “uncertainty” that are weighing on the U.S. economy.

“Economic momentum appears to have slowed in some major foreign economies, and that weakness could affect the U.S. economy. Moreover, a number of government policy issues have yet to be resolved, including trade developments, the federal debt ceiling, and Brexit,” Powell said.

There have been some economists on Wall Street and elsewhere who have urged the Fed to resist cutting rates, arguing that this would only “enable” what they view as the Trump administration’s belligerence on Trade. But as clearly demonstrated by Powell’s testimony Wednesday, the Fed is not joining the #resistance.
Many Fed officials undoubtedly believe that Trump’s tariffs disputes are counter-productive or too heavy-handed when it comes to resolving trade disputes with China and other nations. But the Fed does not have a role in setting trade policy, which is the responsibility of Congress and the president. So it is left in a reactive stance, forced by its legal mandate to adopt policies that promote growth and price stability even when the elected branches take courses it finds unwise.

This is hardly a new problem for the Fed. During the financial crisis and the Great Recession, Fed officials signaled a number of times that the government’s fiscal policy was too tight. Barack Obama had hiked taxes and lawmakers on Capitol Hill had resisted pressure for additional spending, resulting in a fiscal policy that many on the Fed viewed as extending America’s economic woes. But the Fed “enabled” the tax hikes and spending deals by keeping rates low and engaging in a massive bond-buying program.

President Trump is likely pleased with Powell’s testimony on Wednesday as it signaled the Fed would likely be adopting the easing policy he has been calling for for months.

“They devalue their currency. They have for years,” Trump lamented a month ago. “It’s put them at a tremendous competitive advantage, and we don’t have that advantage because we have a Fed that doesn’t lower interest rates.”

Powell also reiterated his belief that he cannot be removed by President Trump, saying he intends to serve his full four-year term as chairman. Although several administration officials have said the president is not considering removing Powell, the idea remains an obsession with the president’s critics and came up several times in the hearing.

By the end of the month, both that concern and Trump’s complaints are likely to be rendered moot.