The US Customs and Border Protection agency has confirmed #IceBae’s status as a CBP officer, telling The Post in an email that it has no problem whatsoever with her newfound fame — and that she can tweet as many photos as she wants.

“CBP does not restrict employees from participating in social media for personal use,” said a CBP official. “As we have previously said, CBP employees are held to the highest expectation of conduct, both on and off duty and must adhere to CBP’s standards of conduct.” 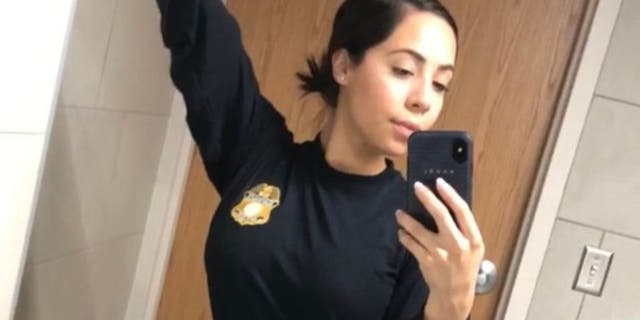 The officer — who identified herself as Kiara Cervantes, of Texas — went viral on Monday after being photographed outside a holding cell during Vice President Mike Pence’s recent border visit. She created a Twitter page to deal with her social media stardom and posted a selfie in her CBP uniform.

The image apparently wasn’t in line with the agency’s standards of conduct and was scrubbed from the internet on Tuesday. Cervantes had also posted a video of herself explaining who she was, but that too was removed.

She did, however, have two new clips up early Wednesday — in which she explained her reasoning for starting the Twitter page.

“First and foremost, thank you. Thank you to everyone who’s supporting me,” Cervantes said. “I kind of just want something positive to come out of this, if anything. I want to reach out to younger women to show them — to work hard, to get an education…to be kind, to be humble. Because all of that goes a long way.”

Cervantes added, “Good things happen to good people…I’m a very respectful person, I’m a very kind person. I don’t let the negativity get to me — even in this day and age with social media, it’s crazy. You have people attacking you from everywhere. And somehow, still…it doesn’t phase me.”

Cervantes, who was dubbed #IceBae on Twitter, has been getting blasted — and praised — by users since going viral, with some calling her “literal scum” and others a “Latina hero.”

“I do read all the positive comments, and I love them,” she said. “I’m still getting use to this Twitter thing. But that’s mostly what I want to come out of this, if anything comes out of this. I want it to be positive. I want to inspire somebody to be a strong, educated, hard-working woman, man — anybody. That’s pretty much it. That’s all i want to come out of my 15 minutes of fame.”

Cervantes, who is a registered Democrat, responded to a request for comment Monday night via email, but told The Post she couldn’t talk about her social media fame until after she “speaks to management with CBP.”

The agency reached out to The Post late Tuesday night and confirmed her status as an officer.

“Yes the employee is a US Customs and Border Protection officer,” the CBP official said.

Attempts to reach Cervantes on Tuesday and early Wednesday were unsuccessful.

Twitter users kept the jokes and jabs rolling after her latest vids were posted.

“Now I understand why so many people are rushing to our border,” wrote one person.