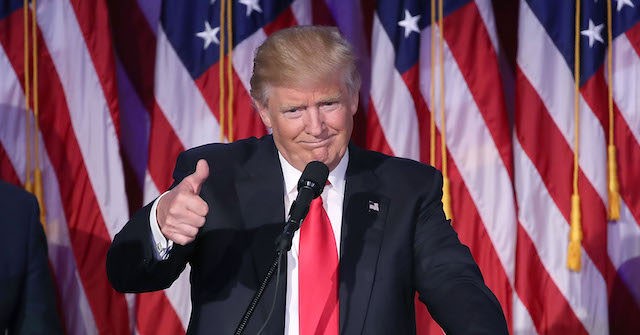 Republican support for President Trump jumped five points after he told the Democrat “Squad” to go back and help fix the totally broken and crime infested places from which they came.”

Prior to Trump’s weekend tweets, a Reuters/Ipsos poll showed the president with a net 67 percent approval ratings among Republicans. In this latest poll, that number climbed to 72 percent approval.

For this reason, Trump’s overall job approval rating held steady at 41 percent, even though he lost some support with Independents, a drop from 40 percent approval to 30 percent.

This Reuters/Ipsos poll is not a great poll to gauge Trump’s approval with because it does not screen for registered or likely voters. It is an “all adults” poll conducted online using 1,113 adults.

Nevertheless, the trends are interesting, and this is not the only poll that shows widespread support for Trump’s criticism of  The Jew-Hating Squad —  which is made up of freshmen Reps. Alexandria Ocasio-Cortez (D-NY), Ilhan Omar (D-MN), Ayanna Pressley (D-MA), and Rashida Tlaib (D-MI).

A recent YouGov survey found a whopping 88 percent of Republicans believe Trump tweets were “great,” “good,” or “okay.” Fewer than 15 percent said the tweets were “bad” or “terrible.”

Most telling, a majority of Hispanics, 52 percent, said they liked the tweets, while 53 percent of white American agreed.

Swing voters were basically split on the tweets, with 48 percent approving and 51 percent disapproving.

So now we have two polls basically proving the five-alarm fake news freakout over Trump’s tweets is no different than anything Trump does: the far-left and their palace guards in the media hate it while Republicans rally to his side.

These two polls about Trump’s weekend tweets can only demoralize a fake news media that was pretty sure… We got Drumpf this time!

But once again, it was all fake news — not just the outrage around the so-called controversy,  but the facts behind the controversy.

Every fair-minded person knows nothing Trump tweeted was racist. He never even mentioned race. What’s more, he didn’t tell anyone to “go home.” He told them to go and “come back.”

What he was doing, as any educated and fair-minded person will tell you, is making a larger point about The Four Harridans of the Demopalypse — how they despise this country, demonize law enforcement as Nazis, appease terrorism, crave personal political power through the horrors of socialism, and are straight up racists and antisemites eager to implement policies that prioritize illegal aliens over American citizens and legal immigrants.

All Trump did was tell the truth, but as I wrote yesterday, the media will never allow you to tell the truth about Democrats. And so, while Democrats are allowed to scream about the greedy Joooozzz and “concentration camps” and “impeach the motherfucker,” allowed to smear our country and countrymen with racist lies, any pushback from anyone on the political right will be attacked as racist or homophobic or — if there are no protected groups being criticized — a call to violence.

The problem for the fake media, though, is that America now sees through all of this, which is why the establishment media are no longer trusted or have a serious impact on public opinion. Only left-wing partisans, the fake media, and their footstools among the Never Trump TrueConCucks are fueling this fabricated outrage, but they are doing so to an American public that can only roll its eyes.