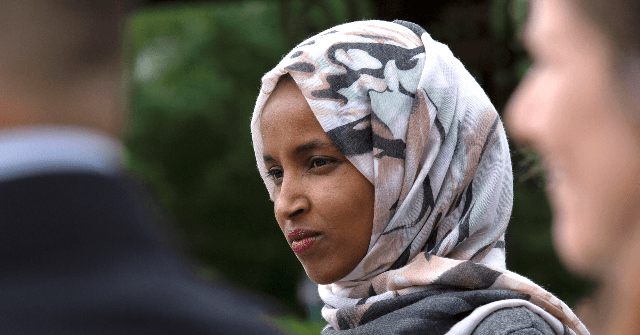 Rep. Ilhan Omar (D-MN) introduced a resolution in the U.S. House of Representatives on Tuesday that supports the anti-Israel “boycott, divestment, sanctions” (BDS) movement — and which also likens Israel to Nazi Germany.

Omar’s resolution is an alternative to a bipartisan, non-binding pro-Israel resolution, H. Res. 246, which opposes the BDS movement, noting it targets Jews and declaring it an impediment to peace between Israel and the Palestinians.

Left-wing Democrats in the House oppose H. Res. 246 and are pressuring party leaders not to bring it to a vote next week, according to Politico. Many also fear that asking members to vote against BDS would expose internal rifts.

The resolution Omar introduced, H. Res. 496, is co-sponsored by Rep. Rashida Tlaib (D-MI), who wants Israel to be dismantled and replaced by a Palestinian state. Civil rights veteran Rep. John Lewis (D-GA) is also a co-sponsor.

The text declares Americans have the right to engage in boycotts against Israel, and cites past examples of boycotts, including the Boston Tea Party, the anti-apartheid movement, and the boycott of Nazi Germany, among others.

The BDS movement was launched after the notorious United Nations World Conference Against Racism in Durban, South Africa, in 2001, which featured virulent anti-Israel resolutions and explicitly anti-Jewish demonstrations.

Anti-Israel activists, undeterred by the negative publicity their tactics generated, used South Africa as the context to launch BDS, which is modeled after the international effort to boycott the apartheid regime until it finally collapsed.

Many critics also consider BDS to be antisemitic because it discriminates against Israel, while ignoring Palestinian terror. Many also consider comparing Israel — the Jewish state — to Nazi Germany to be a form of antisemitism or even Holocaust denial, depending on the context.

Ironically, Omar reportedly told voters during her 2018 congressional race that she did not support BDS, only to reverse her position once she won the election.

The 5th congressional district contains one of the Midwest’s largest Jewish communities, as well as a large Muslim community.

Omar says she is planning to visit Israel and the Palestinian Authority later this year, though it is not clear she will be allowed to enter Israel. Israeli law permits the government to reject any visitor who supports the BDS movement.

On Wednesday, Omar told CBS This Morning that she did not regret making remarks that many — including in her own party — perceived as antisemitic. “Nothing I said was meant for that purpose,” she told CBS’s Gayle King.

Joel B. Pollak is Senior Editor-at-Large at Breitbart News. He earned an A.B. in Social Studies and Environmental Science and Public Policy from Harvard. He is a winner of the 2018 Robert Novak Journalism Alumni Fellowship. He is also the co-author of How Trump Won: The Inside Story of a Revolution, which is available from Regnery. Follow him on Twitter at @joelpollak.