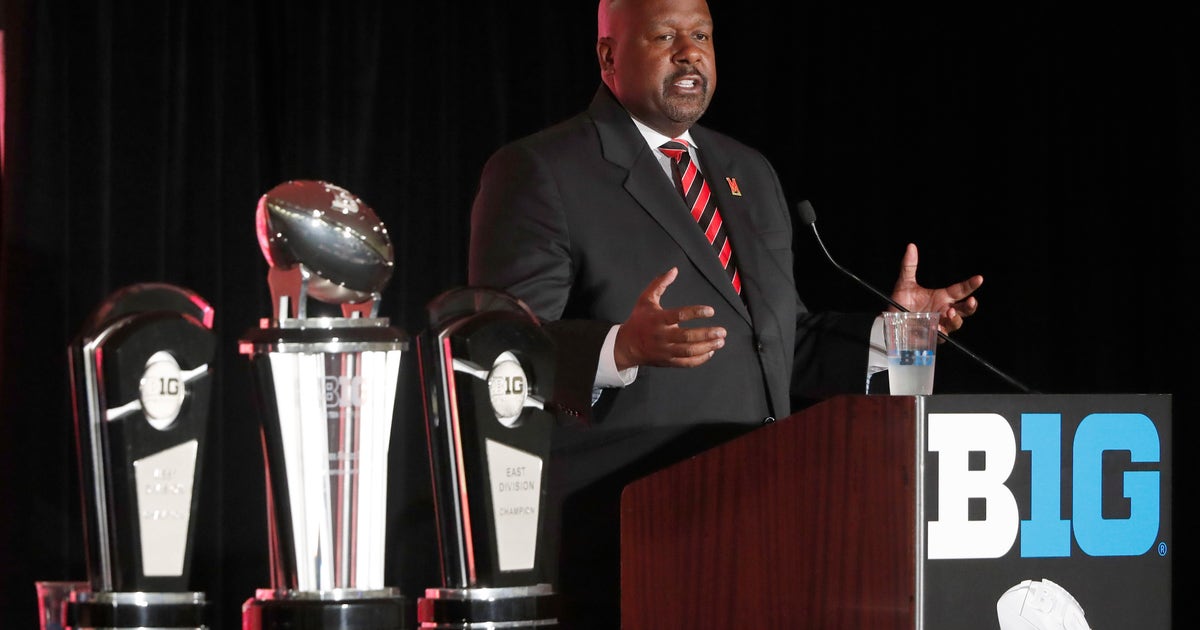 CHICAGO (AP) — When Mike Locksley was hired in December as Maryland’s head football coach — the first black head coach in program history — he knew the timing was perfect.

Locksley, a Washington D.C. native, was Maryland’s offensive coordinator and then interim coach for the latter half of the 2015 season after the school fired Randy Edsall.

When searching for Edsall’s replacement, Maryland passed on Locksley and instead hired DJ Durkin to be the program’s new leader.

Three years later, Maryland again needed a head coach and Locksley, who became one of the top assistants in the country under Nick Saban at Alabama, said yes.

“This is a dream come true for my family and I am able to come home and coach the university that I grew up rooting for as a kid,” Locksley said Thursday at Big Ten football media days.

Locksley replaced Durkin, whom the university fired amid public pressure. Durkin had been on administrative leave for the first eight games of the 2018 season while a university commission investigated his program’s culture in the wake of 19-year-old offensive lineman Jordan McNair’s death following an offseason team workout.

Those investigators found Durkin’s program had a culture “where problems festered because too many players feared speaking out.” The school briefly reinstated Durkin but ultimately fired the embattled coach.

When Locksley arrived in College Park, he soon realized the football program needed him to be much more than just the head coach.

“It shows you how timing is everything,” he said. “My familiarity with Jordan, with Marty and Tonya, the mom and dad, there was a relationship there.”

Locksley’s son, Meiko, was fatally shot on Sept. 3, 2017, in Columbia, Maryland, around nine months before McNair’s death. Meiko was 25. The killing remains unsolved.

“Because of my relationship with Marty prior to Jordan passing, I was able to kind of mentor Marty through it,” Locksley said. “When I heard the news, I called Marty. The circle of life isn’t built for parents to bury their child. It’s kind of like an itch you can’t scratch. So when I talked to Marty I talked to him about that. It’s hard for people who don’t know. When they say, ‘Hey, I feel your pain.’ You really don’t. I think that’s what really cemented the bond and organic relationship Marty and I have, as well as Tonya.

“I think that made the transition easier. It allowed me to have empathy for our team because they lost a brother. My kids dealt with losing a brother so I had a unique perspective of what you need to do to heal, while trying to move the program forward the right way.”

Locksley’s first priority as head coach was to spend meaningful time with his players. Not to get to know them. He had already done that. Locksley recruited most of the sophomores, juniors and seniors. Many of them enrolled at Maryland because of him. He instead wanted to build a culture of a true family. Locksley installed “Sunday Fundays,” where players come over to his house and just relax, enjoy life and be a kid.

“Just having fun, just chilling, in the pool, playing basketball, having a great time barbecuing. It’s a great family atmosphere,” senior defensive back Tino Ellis said of the Sunday afternoons at the Locksley house.

And then Locksley wanted his players to start building and exhibiting the championship-level habits he saw at Alabama.

“We want to honor Jordan in how we compete, practice and prepare,” he said. “Our players have embraced it. Our hearts still go out to Marty and Tonya, but we’re definitely trying to move the program forward and do it the right way.

“What matters most to me is that we play with the habits and behaviors to be the best version of Maryland that we can be and usually the results take care of themselves.”

Anthony McFarland Jr. broke the Maryland freshman rushing record with 1,034 yards last season as a redshirt freshman. McFarland said everyone in the Maryland-District of Columbia-Virginia area knows Locksley. He called the 49-year-old head coach a “godfather to DMV.”

“I’m not trying to bring up last year, but it’s different when you have a coach and you feel like you’re just going out there to play,” he said. “You’re not playing for something or you’re not playing for him. But this year, coach Locks has been through everything. He lost his son, been through a lot of adversity. I want to play for that man. It’s a different feeling when you want to play for somebody.”

The Terrapins, who finished 5-7 (3-6 in the Big Ten) last year, open the season on Aug. 31 at home against backyard foe Howard University. Senior defensive back Antoine Brooks Jr., who led the team with 9.5 tackles for loss a year ago, said this year has a different feeling with Locksley leading the way.