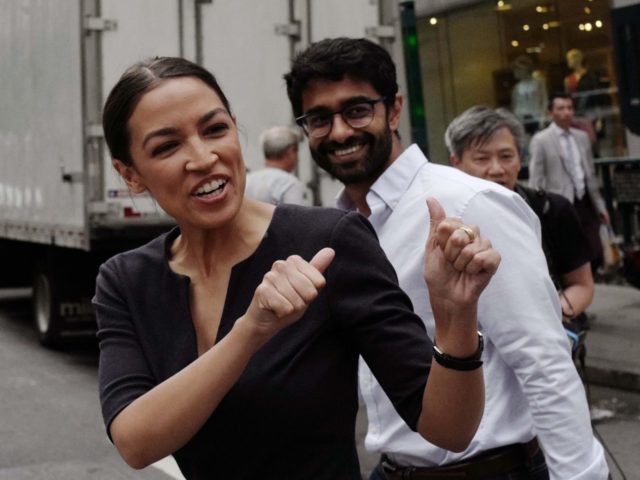 Rep. Alexandria Ocasio-Cortez’s (D-NY) chief of staff and her communications director have announced plans to depart.

The Intercept reported on Friday that Saikat Chakrabarti, the congresswoman’s chief of staff since January, and Corbin Trent, her communications director, would be leaving her congressional office in the next few weeks.

Chakrabarti, who masterminded Ocasio-Cortez’s election to Congress, is heading to New Consensus, a nonprofit working to bolster the Green New Deal and other climate change initiatives.

The congresswoman’s office said in a statement:

Saikat has decided to leave … to work with New Consensus to further develop plans for a Green New Deal. We are extraordinarily grateful for his service to advance a bold agenda …  Saikat’s goal has always been to do whatever he can to help the larger progressive movement, and we look forward to continuing working with him to do just that.

Trent, on the other hand, is transitioning to Ocasio-Cortez’s reelection campaign, which has elicited a number of high-profile challengers.

“With the Ocasio 2020 campaign beginning to ramp up, I’ve asked Corbin to transition to the campaign full-time and he has agreed to do so,” Ocasio-Cortez told The Intercept. “I’m looking forward to growing the movement with him in Queens and the Bronx and across the country.”

The shakeup comes as the congresswoman’s office has been engulfed in controversy since Chakrabarti attacked more moderate members of the House majority.

In June, Chakrabarti took to social media to air his frustration with moderate Democrats for forcing Speaker Nancy Pelosi (D-CA) to abandon a $4.6 billion emergency border appropriation bill favored by progressives. In a series of tweets, Chakrabarti likened the moderates to old Southern Democrats, many of whom were avowed segregationists.

He stood by the comparison even when a progressive activist noted Rep. Sharice Davids (D-KS), the first openly LGBT Native American woman elected to Congress, was one of the moderates that wavered on the bill.

Although Breitbart News reported on the controversial comments at the time, neither Ocasio-Cortez nor House leadership acknowledged that Chakrabarti may have crossed a line. The situation, though, changed sharply in July when Ocasio-Cortez accused Pelosi of “singling out newly elected women of color.”

After the rebuke, Pelosi’s allies within the Congressional Black Caucus (CBC) moved simultaneously to defend the Speaker and attack the freshman congresswoman. A number of the CBC’s members, including Rep. William Lacy Clay (D-MO), directed their anger at both Ocasio-Cortez and her chief of staff.

“It shows you how ignorant and little history [Chakrabarti] knows, how ignorant he is to American history. How dare he,” Clay told The Hill.

The Missouri Democrat extended his criticism to Justice Democrats, the group started by Chakrabart to support left-leaning primary challenges to establishment Democrats.

“I find it juvenile, their tactics, I find their ignorance to be beyond belief about American history and about who are really segregationists,” Clay said. “And so how dare they try to play the race card at this point, it shows you the weakness of their arguments.”

Other moderates appeared to echo the sentiment, with some even anonymously calling for Chakrabarti’s ouster.

“Do I think @AOC’s chief of staff (@saikatc) needs to be fired? Of course I do,” says moderate Democratic lawmaker.

Even prior to the broadside about moderates, Chakrabarti had come under fire for his tenure leading Justice Democrats. In March, a complaint was filed with the Federal Election Commission claiming he funneled more than $1 million in political donations to two of his private companies.