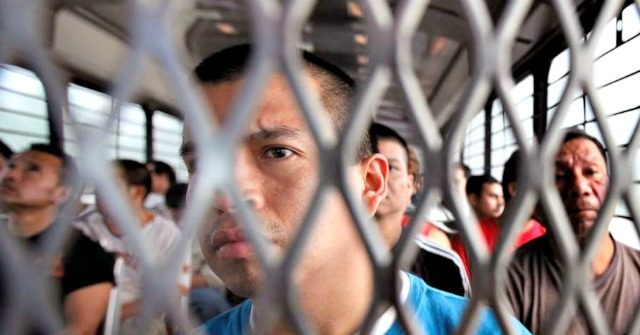 U.S. officials are working with Panama’s government to shut down the growing flow of migrants from Asia, Africa, and the Middle East, says Kevin McAleenan, the acting secretary of the Department of Homeland Security.

“We are seeing [migration] flows from throughout the Eastern Hemisphere from Africa, from the Middle East, from South Asia, that are arriving in South America and making a long land trek to the U.S. border, paying, in some cases, $30,000 to $50,000 per person to a variety of alien-smuggling organizations,” he told Breitbart News on August 2.

“That’s something that we want to work with Panama to cut off.”

The outreach to Panama is part of a region-wide strategy that includes migration deals with Mexico, Guatemala, El Salvador, and other countries.

The payoffs already include a dramatic reduction in migrants emerging from Mexico, McAleenan said. “We have seen a significant reduction. From May to June [there] was a 28 percent reduction in flow, far exceeding the seasonal reduction that could have been anticipated,” he said, adding, “We’ve seen Mexico making a significant effort on their borders … as well as on the transportation routes in significantly reducing the phenomena of large groups crossing our border. We have had many fewer groups [of] over 100 [people] crossing in July than we faced in May, and we haven’t had any of the massive groups of 400-plus [migrants] that we were seeing back in May, thanks to Mexico’s efforts.”

But more progress is needed from Mexico, McAleenan warned: “We’re in constant contact with Mexican government, on the numbers, on where we think we can apply some additional effort. We are going to need to see more progress in August. We need to continue to maintain these reductions in the crossings, or we’re going to have to reevaluate the approach.”

Mexico’s new president ended the nation’s tolerance of the migration and labor trafficking when President Donald Trump threatened to impose tough economic penalties. Since then, Mexico’s population has also shifted its views to strongly oppose the migration:

Poll: 39 percent of Democrats strongly want the gov’t to ignore orders from judges to deport illegal migrants. Yet Democratic leaders & 2020 candidates insist to all that the party does not want open borders. https://t.co/SYDHwtIA6u

That is a strategic win for Trump’s tough opposition to the border chaos, which has been created by the U.S. establishment’s preference for a high migration, low wage national economic policy:

Democrat Sen. Schumer gives thumbs-up to detained illegals, urges all migrants be sent to Catholic Charities, then urges more border loopholes. Yet in NY, employers still are not raising wages to compete for US workers amid the flood of migrant labor. https://t.co/BfwDUk9Lyq

Recent talks with Guatemala and El Salvador are also allowing the faster return of migrants from those countries, a senior official told Breitbart News.

The quick returns are possible because officials from those two countries have agreed to accept repatriated migrants without travel documents prepared by their consulates. “This is a big deal because it increases the swiftness of repatriation, reduces the average length of stay in ICE custody, and frees up bed space for other immigration enforcement efforts,” a senior agency official told Breitbart News.

The senior official also talked up the July 26 deal with Guatemala, which is expected to allow U.S. officials to deny asylum requests by migrants from many countries who pass through Guatemala on their way to the U.S. border, stating, “We’re going to have a measured implementation, [which is] supported by State Department and international organization, to play a vital role in building up their capacity. We believe it is going to have an immediate impact as that loophole in our laws is closed down and sends a very clear message that reduces the profits and the power of human smugglers operating through Guatemala and Mexico.”

The deal will also enable “people to access asylum and will build capacity for asylum closer to the point of origin,” the official said.

However, pro-migration groups in the United States and Guatemala are trying to block the July 26 deal. For example, House Speaker Nancy Pelosi is expected to visit Guatemala on August 8 and will likely encourage left-wing groups to oppose the deal because it threatens to stop migration to the United States.

McAleenan declined to comment on the role of U.S. groups or Pelosi in the Guatemalan debate over the deal.

“Our focus is working administration to administration, including recognizing that Guatemala has an election period, [and] they will have a transition of government over the next four-and-a-half months,” he said, adding: “Their election is in ten days. So we’re working with the current administration, and it’s going to be there for another four-plus months to implement this agreement, to get it off the ground. But [we will] also communicate as soon as we can to the president-elect and the government … about the importance of this partnership.”

The [U.S.] President’s message is clear: If you work with us on addressing migration flows and issues that are in the U.S. national interest, it opens the door for significant partnership on economic issues, investment, and development.

Panama offers another opportunity for regional cooperation, McAleenan said. “We’re interested in addressing irregular migration flows from any country to our Southwest border that are coming through Central America, and Panama is a key partner given their position on the isthmus. They are a choke point, the first entry into Central America.”

He added, “They have a brand new government with a security minister who’s spoken publicly about the need for Panama not being an access point for human smuggling and trafficking and not having his administration, his ministry, involved in protecting or participating in that process.”

Acting Secretary McAleenan went on to say, “They’ve historically been a very good partner, increasing the capacity of their border patrol … sharing information with us on individuals who are crossing who might present a security threat and even repatriating individuals to the Eastern Hemisphere, including to the Middle East and South Asia, in some cases.”

“We want to increase that partnership [with Panama] … and deepen our legal mechanisms, including with asylum cooperation,” McAleenan added: