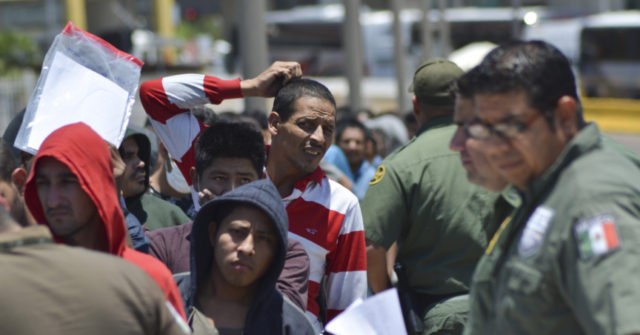 None of the roughly 1,200 migrants who had their asylum cases adjudicated by federal immigration officials while they waited in Mexico as part of President Trump’s “Remain in Mexico” policy were found to be eligible for asylum, federal data finds.

Since the Trump administration has enacted the Remain in Mexico policy to ensure that migrants seeking asylum in the U.S. remain in Mexico while their claims are adjudicated, none of the migrants so far have been found eligible for asylum, according to federal data.

As of June, about 1,155 migrants waiting in Mexico had their asylum claims processed and finalized by U.S. federal immigration courts. In the end, none of the 1,155 migrants were eligible for asylum and thus must return to their native countries.

Today, there are nearly 13,000 cases still pending where migrants — mostly from Central America — are waiting in Mexico until their asylum claims are adjudicated. Of those migrants still waiting, only about one percent have legal representation.

Before the U.S. began mandating that most migrants seeking asylum remain in Mexico while their claims were processed, about 88 percent of border crossers and illegal aliens were able to avoid immediate deportation by claiming “credible fear” at the southern border.

Trump’s Remain in Mexico policy has also contributed to a significant drop in the number of border crossers and illegal aliens being released into the interior of the country. As of mid-July, the Trump administration has cut the catch and release program about 85 percent compared to release levels from months prior.

After reaching record levels in May, illegal immigration at the U.S.-Mexico has slightly declined to nearly 95,000 border apprehensions in June. This does not include the potentially thousands of illegal aliens who successfully crossed into the country undetected by Border Patrol agents.