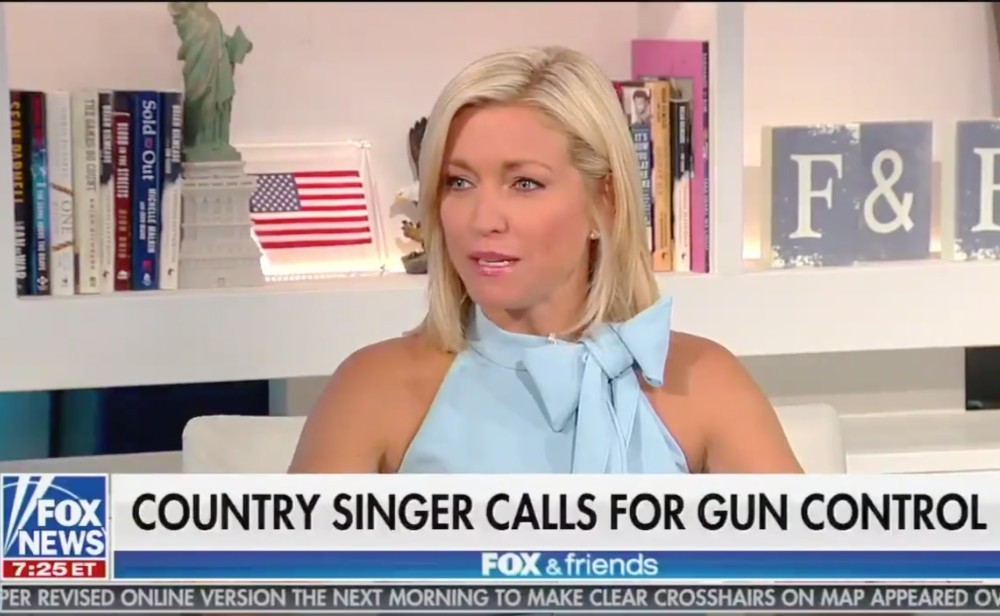 Fox & Friends cohost Ainsley Earhardt was absolutely overcome with the vapors during Wednesday morning’s broadcast while discussing the comments Kacey Musgraves made on stage at Lollapalooza following the mass shootings in El Paso and Dayton. Earhardt was particularly scandalized by Musgraves’ use of the word “fuck” when denouncing gun violence.

“What is happening to country music,” Earhardt said after running the clip of Musgraves’ chant. “She’s up there preaching about gun control, but how about her language! What happened to wholesome country singers?”

Earhardt was joined by garbage bag full of rancid pudding Todd Starnes to chastise Musgraves over voicing an opinion on gun control in the wake of two massive tragedies that claimed the lives of at least 31 people. Starnes took the opportunity to plug his new book Culture Jihad , in particular the chapter in which he accuses country artists of leaning too far left.

Earhardt then read a tweet from Musgraves in which she clarifies her position on Second Amendment rights and talks about her unease with assault weapons: “Let me be clear – I’m from Texas. I grew up around hunting and guns. There’s a time and place for that and even self protection in ways..but this is different. The system is majorly flawed and NOBODY NEEDS ANYTHING REMOTELY AUTOMATIC. PERIOD. They’re mass killing machines.” Starnes reacted by borrowing a page from the Laura Ingraham playbook and telling Musgraves to shut up and sing.

“Just don’t talk politics. Sing. That’s what we pay good money to hear you do,” Starnes said. “I mean, when you’re talking about country music, you don’t want to talk about going after people’s guns. That’s like bringing store bought chicken to Wednesday night church supper.”

Yeah, Kacey, leave the social commentary to a sophisticated genius like Starnes, who once praised then-candidate Trump for possessing “the man-parts big enough” to restore strength to an “emasculated” GOP leadership.

Fox’s Todd Starnes to .@KaceyMusgraves: “Just don’t talk politics. Sing. That’s what we pay good money to hear you do. … She has been Dixie Chick-ified.” pic.twitter.com/QhQzV9aKFL

Earhardt, however, remained stuck Musgraves’ F-bomb, which is a reasonable word to use when reacting to a needless tragedy, let alone two occurring within a 24-hour window. Just ask Beto O’Rourke.

“What about the kids? She is asking them to chant the F word,” Earhardt said, as an imaginary monocle popped out of her eye. “I thought about that. I don’t want my daughter — these young girls, they look up to these musicians. She sings two great songs that I have downloaded … but now I’m gonna look differently at her because she is chanting that vulgar language.”