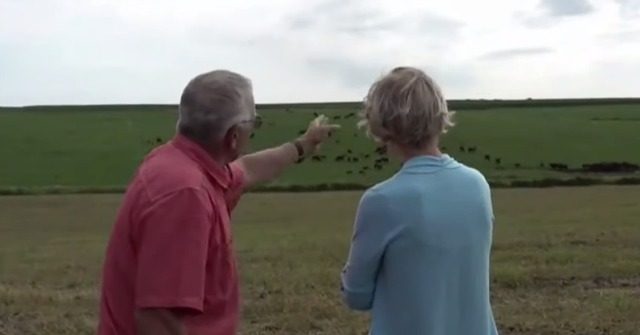 An Iowa farmer confronted Sen. Elizabeth Warren (D-MA) over her support of the Green New Deal, explaining that he takes issue with the plan’s intent to eliminate cows, to which Warren replied with a hesitant, “Eh.”

The GOP War Room published a video Thursday, showing an Iowa farmer having a discussion with the presidential hopeful and explaining why he disagrees with the Green New Deal’s outline, which laments the existence of cows.

“You know, the Green New Deal says we need to get rid of cows,” he said, with Warren letting out an audible, “Eh.”

I don’t agree with that because well-managed grassland where you rotationally graze – you know all these paddocks like that system there has about eight different paddocks – you’re actually going to use more CO2 and sequester more carbon because of the regrowth all the time, and yet you know that’s a permanent pasture.

Warren did not say anything during the farmer’s explanation, nodding her head and adding an occasional “uh-huh.” It seems the farmer was focusing on cows from a land management standpoint, while the Green New Deal’s outline specifically takes aim at the biological reality of cow flatulence and the impact that has on the environment.

A Q&A portion of the Green New Deal’s outline states:

We set a goal to get to net-zero, rather than zero emissions, in 10 years because we aren’t sure that we’ll be able to fully get rid of farting cows and airplanes that fast, but we think we can ramp up renewable manufacturing and power production, retrofit every building in America, build the smart grid, overhaul transportation and agriculture, plant lots of trees and restore our ecosystem to get to net-zero.

“My point is we have become so ignorant of the basic principles of biology in food production that we have said – we answer them all through technology instead of letting mother earth and having respect,” the farmer added:

The video follows the rollout of Warren’s plan to invest in rural America, which involves a “’full out effort’ to decarbonize agriculture,” according to Politico.

Warren, who endorses the Green New Deal’s goal of reaching net-zero emissions by 2030, calls for a “full out effort” to decarbonize agriculture. She would pour $15 billion each year into a USDA program that pays farmers to adopt conservation practices.

In order to create more opportunities for small, beginning and minority farmers, Warren proposed expanding access to credit, as well as creating a $1 billion “Farm to People” program so federally funded institutions like military bases and hospitals can source food from local producers.

The senator did not detail how she would pay for these initiatives, however.

Given Warren’s hesitancy to the farmer’s remark – on the Green New Deal’s desire to eliminate cows – it remains unclear if the Massachusetts lawmaker truly believes that the U.S. needs to reduce the number of cows in order to address what the left claims is the impending climate crisis.