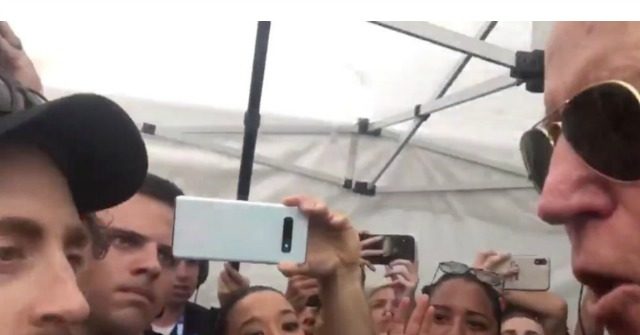 Fellow journalists and some politicos defended Breitbart News’s Joel Pollak after he confronted former Vice President Joe Biden for lying about President Trump saying that neo-Nazis in Charlottesville were “very fine people” during a press conference in 2017.

At the Iowa State fair, Pollak — who has reported in-depth on the perpetuation of that lie by Trump critics — asked Biden if he was aware he was misquoting Trump, and that the president had never called neo-Nazis “very fine people.”

Biden responded, “No, he called all those folks who walked out of that — they were neo-Nazis. Shouting hate, their veins bulging.”

Pollak correctly pointed out that Trump had actually condemned them. (Trump had said, “You also had people that were very fine people on both sides… . I’m not talking about the neo-Nazis and white nationalists because they should be condemned totally.”)

Biden then incorrectly told Pollak that Trump did not “specifically” condemn them.

When Pollak tried to respond, Biden cut him off and raised his voice, “No, he did not. He said, he walked out, and he said — let’s get this straight. He said there were ‘very fine people’ in both groups. They’re chanting antisemitic slogans, carrying flags.”

After the confrontation, the Daily Wire’s Ryan Saavedra pointed out that Trump had indeed condemned neo-Nazis and white nationalists specifically and tweeted video of Trump’s remark:

Here is the video of Trump saying it: “I’m not talking about the neo-Nazis and the white nationalists, because they should be condemned totally”

Saavedra also tweeted video of CNN’s Jake Tapper making that same point on his show — that Trump was not talking about white nationalists and neo-Nazis when he said “very fine people.”

Commentator Yossi Gestetner came to Pollak’s defense, after a Politico reporter identified Pollak as a “man” who “accuses” Biden of misquoting Trump.

Scott Adams, chief strategy officer of WhenHub and creator of the Dilbert comic strip also tweeted that the Biden campaign “admits its central campaign premise is a lie and publicly pleads for information that their news sources do not supply.” Adams also tweeted out a link to an essay he has written debunking the lie that Trump called neo-Nazis “very fine people”:

The @Biden campaign admits its central campaign premise is a lie and publicly pleads for information that their news sources do not supply. I provide this link to answer their questions: https://t.co/MVZUGv2gn3 https://t.co/BlxETbCDL4