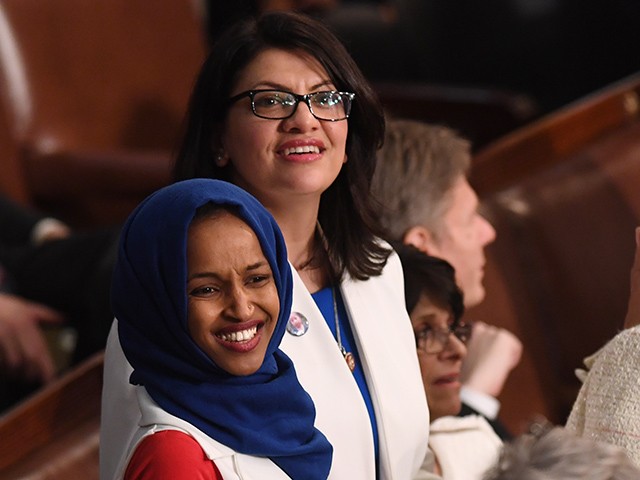 Trump told senior advisers that “Israel should bar Omar and Tlaib’s entry because the two congresswomen favor a boycott of Israel,” the Axios news site reported.

In a separate report from Israel’s Channel 13, Trump was allegedly quoted by advisors saying that if Omar and Tlaib want to boycott Israel, “then Israel should boycott them.”

The Axios report said three U.S. officials confirmed Trump’s remarks and that Prime Minister Benjamin Netanyahu’s office did not deny the account. Two senior Netanyahu aides said the issue was very sensitive and they were not allowed to discuss it, Axios said.

“The Israeli government can do what they want,” she said.

Last month, Israel’s Ambassador to the U.S. Ron Dermer said Israel would allow Omar and Tlaib to visit “out of respect for Congress.”

“Out of respect for the U.S. Congress and the great alliance between Israel and America, we would not deny entry to any member of Congress into Israel,” Dermer told the Haaretz daily.

On Sunday, U.S. House Majority Leader Steny Hoyer told reporters in Jerusalem that Tlaib and Omar’s trip could only have positive ramifications.

“I talked with Mr. Dermer, Israel’s ambassador to the U.S., and he issued a statement after discussing this with the [Israeli] government and the prime minister that any member of Congress was welcome to come to Israel,” Hoyer said.

“Israel’s confidence as expressed by Mr. Dermer in having any member of Congress who wants to come to Israel have the opportunity to come to Israel and have access and to see what all these members have seen and will see is appropriate.”

House Republican leader Keven McCarthy, who is leading a trip by Republican congressmen, said he wished Omar and Tlaib could have joined such a trip.

“The president knows there are people who have a difference of opinion,” McCarthy said. “I think it is healthy for anyone who has that opinion to come. I feel very secure in this. Anyone who comes with open ears, open eyes and an open mind, will walk away and have an understanding just as all these [Congress] members do, that this bond is unbreakable.”

Earlier last month, Haaretz reported that Prime Minister Benjamin Netanyahu would be tasked with deciding whether Omar and Tlaib would be allowed into the country, due to the sensitivity of the visit and its possible ramifications for Israeli-U.S. relations.

Omar confirmed that she and Tlaib were planning to visit Israel and the West Bank.

“Everything that I hear points to both sides feeling like there is still an occupation,” Omar told the the Jewish Insider about the trip, slated to begin on August 18.

Israel’s Interior and Strategic Affairs Ministries have denied visas to students, activists and artists who have a proven record of publicly calling for the boycott of Israel. Both Tlaib and Omar have expressed their support for the BDS movement.

Last year, Tlaib first announced that she would lead a taxpayer-funded congressional trip to the West Bank to coincide with the annual Israel mission by AIPAC — a longstanding tradition for freshman lawmakers.