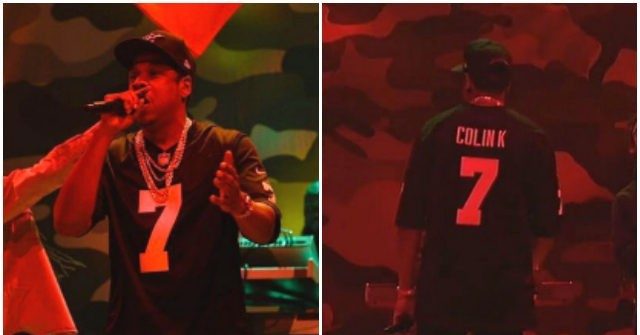 According to a report, the National Football League is set to enter into a “social justice partnership” with rapper and social justice warrior Jay-Z and his Roc Nation entertainment company.

Roc Nation will also become a co-producer of the Super Bowl halftime show next year, according to Bleacher Report.

NFL is forming an “entertainment and social justice partnership” with Jay-Z and Roc Nation, per @MarkMaske

This new deal comes only a year after Jay-Z publicly snubbed the NFL’s offer of performing at the Super Bowl halftime show because of the league’s supposed treatment of former quarterback and national anthem protester, Colin Kaepernick.

The rapper even immortalized his disgust with the NFL in a song.

In Jay-Z and Beyonce’s song “Apesh*t,” the New York-born rapper says: “I said no to the Super Bowl: you need me, I don’t need you. Every night we in the end zone, tell the NFL we in stadiums too.”

If there is any confusion over his meaning, just as the lyric is delivered, the video for the tune shows several young men taking a knee, a clear reference to Colin Kaepernick.

Vexing questions about Jay-Z’s new deal with the NFL remain, though. Did the rapper cave on his staunch support of Kaepernick? Is he bailing on his refusal to deal with the NFL over the ex-player’s treatment? Is the NFL on the verge of caving to Jay-Z on that question? Or did both just decide to put the Kaepernick incident behind them?

Is this all just a dash for the cash for Jay-Z despite all his proclamations about Kaepernick?

Other questions also arise. Why is the NFL jumping back into social justice warrior movement just when fans were starting to come back to the game? After the 2016 and 2017 seasons that saw millions of fans leave the game due to the constant anthem protests, the 2018 season finally saw that loss of viewers start to subside. A reversal of fortune, that coincided with the end of the anthem protests. Is the NFL set to begin the social justice stuff all over again, just when the fans were coming back?