While others turned a blind eye to the situation, this man jumped in to help.

You may wonder why God allows for this. One, God doesn’t take you through life by the hand. He breathes into you the sense of judgment and lets you make decisions. Two, maybe this is God’s way of showing you what is wrong and how not to be. Maybe he is coaxing you to correct what is being done incorrectly.

Then there are people, good samaritans we love to call them, who come in and alter things. It is probably out of their way but they step in when they see something wrong and inhuman happening. These are the people who restore faith in humanity and utilize their lives to change the lives of some other people. These people are in the literal sense ‘godsent’ and come and intervene for the sake of everything God would preach which is love, kindness, and compassion. It is such people who make living a little more pleasant and happy.

For a suburban woman Sam Saia, it was just another day of work. She woke up and prepared herself for the rest of the day. She reached the station and boarded her usual subway. She had done this countless number of times and nothing was different about this one. After all, what could go wrong?

She was in for a major surprise when she was sitting alongside a man. Initially, she didn’t think much of this either. But this man was sitting with his legs wide apart. Very commonly referred to as manspreading. This is okay and to a large extent, we understand that most men prefer to sit this way. But when you are on a subway and there is limited seating space, some of these luxuries are compromised. This man, however, chose to be blissfully unaware and ignorant of the discomfort he was causing Sam while sitting with her, like that. 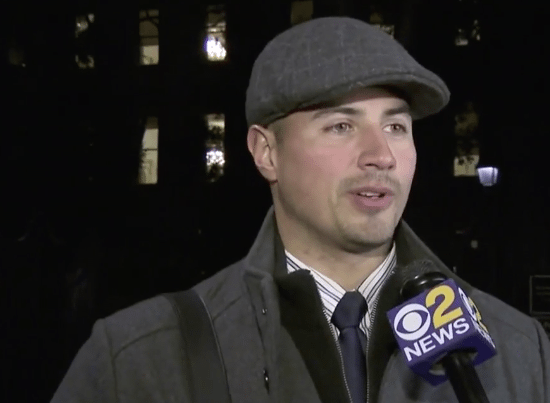 Sam decided that the discomfort was a little too much to tolerate and asked the man to kindly sit properly and not take up too much of their shared seat. It was a very civil thing to do and sometimes voicing your discomfort is necessary especially when it is being tolerated at the expense of another making themselves a little more comfortable. Sam and the man got into an argument over the issue. They bickered about it for a while when suddenly, and very unexpectedly the man punched her, a full blow to her face. The man between the argument just lost his fuse and snapped, shocking all the subway commuters.

But no commuter decided to help her or stop the man. They just decided to turn a blind eye after this man punched Sam, whose head hit the side of her seat. All but one man stayed unaffected.

Thankfully a 29-year-old man by the name Victor Conte approached the man and restrained him by holding his hands firmly. All along now the assaulter was spewing venomous curses at the woman and Victor. Victor, however, was very firm in his demeanor and held the man away strongly. This act of his averted further abuse on the woman. The security footage shows the frightening order of events and a well dressed Victor holding this man away from the woman, while he is only inches away from his face. Victor is heard asking the man to get off the subway and that his act was wrong and an act of cowardice. Hitting a woman is an act of cowardice and a fake show of power. Victor can be heard saying, “ Get off the train, bro! You don’t hit a lady.”
He forced the man out of the subway after that, at the nearest stop.

Later on, Victor confirmed that he was furious that the assaulter had resorted to physical violence to argue his point. That too against a woman. Victor was also visibly upset about the fact that nobody in the subway so much as bothered to tell this man to stop. Two men sitting across Sam turned their faces away. This infuriated and upset Victor more who was glad he was present to stop the situation from worsening. ““I was mad that he hit her and no one else on the train did anything. There were two guys literally sitting across from her, and they just looked away,” he said later.

Thankfully Victor did not decide to turn a blind eye to the situation. In most cases such as this one, people do not want to get involved in fear of being hurt or simply because it is none of their business and they don’t want to get in the middle of anything ugly. Some just do not care while astonishingly a few people find this entertaining. It is a saddening fact that, in the world today, a crowd is not enough to save you from an assault. Three-quarters of the crowd will not want to get involved.

It is good samaritans like Victor, who are constant reminders of the right act and what humanity should look like. It is men like him who should serve as examples to others about how one must behave in public spaces.

Share this video and encourage others to stand up for those in need!