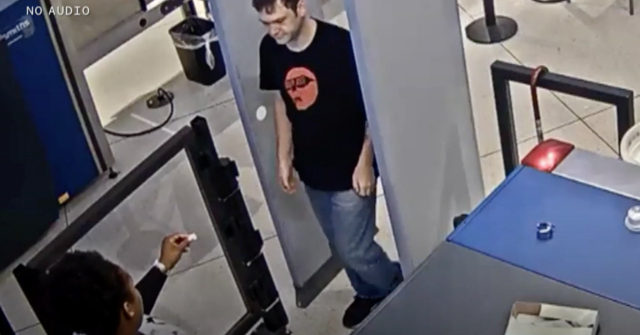 An airport security worker in Rochester, New York, was fired after she slipped a passenger a note that said, “You ugly!!!”

Neal Strassner, 40, told the New York Post Friday that a female Transportation Security Administration (TSA) worker handed him a small, folded-up piece of paper with the note before he collected his things back in June.

“I didn’t open it because I didn’t care about it,” he told the Post. “She turned around a few times asking, ‘Are you going to open that?’”

He initially shrugged off the message when he received it and continued on to catch his flight to Kansas but called the airport later to complain.

Strassner, a Rochester native who travels frequently for his job as a technical coordinator, was headed to Wichita the morning of the late June incident.

Strassner received a piece of CCTV footage from the county through the Freedom of Information Act (FOIA), which showed the former worker tearing another piece of paper from a latex glove box.

The employee who gave him the note worked for VMD Corp., a government contractor based in Virginia working through the TSA.

Strassner said the company promised to get in touch with him about the incident by August 13. When he did not hear back by Thursday, Strassner uploaded the video to Reddit. The company responded in two hours.

TSA then announced that the employee was fired.

“TSA holds contractors to the highest ethical standards and has zero tolerance for this type of behavior,” the agency said in a statement. “This instance, which involved a contract employee, was investigated immediately upon receiving the complaint by the traveler. The employee has since been terminated by the contractor.”

Despite the incident, Strassner said he will still fly out of Greater Rochester International Airport.