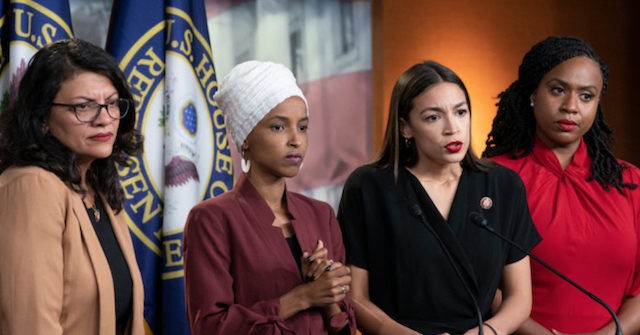 Friday on MSNBC’s “The 11th Hour,” liberal documentary filmmaker Michael Moore said he was all for Reps. Alexandria Ocasio-Cortez (D-NY), Ilhan Omar (D-MN), Rashida Tlaib (D-MI) and Ayanna Pressley (D-MA) being the face of the Democratic Party, a suggestion President Donald Trump has made in recent weeks.

The foursome known as “The Squad” representing the Democrats’ brand is how they win according to Moore.

“Let’s hope that Alexandria and Rashida and Ilhan and Congresswoman Pressley are the face because that’s how we’re going to win,” Moore said to host Brian Williams. “We’re going to win with people who believe that climate change is real. We’re going to win by getting behind people who want to raise the minimum wage, who are going to fight for all these things that the American public wants. That’s ‘The Squad.’ They’re the force out there.”

Moore offered a lengthy explanation about of history repeating itself in an effort to bolster that case.

“Well, first of all, Michigan has a long history, as does Wisconsin and Minnesota, the upper Midwest, of what you would call socialism or Democratic socialism or farm labor Democratic Party. We’ve never trusted the banks or the large corporations. General Motors was founded in Flint, Michigan, in 1908. A year of General Motors trying to turn this into a company town, people were so upset at it, in the next election. Flint elected a socialist mayor to remove the pro-G.M. mayor when the corporation first began. So that’s who we are. And the 13th district that Rashida Tlaib represents also has a strong history of — sadly right now it’s the third poorest congressional district in the country.”

“But it also has another history,” he continued. “The congressman back in 1972 — I remember this. I was a senior in high school. Charles Diggs was his name. He’s one of the founders of the Congressional Black Caucus. He represented Rashida Tlaib’s district in the ’70s. And he wanted to go and see the situation in South Africa. And the South African government would not give him a visa, and they banned him from visiting the country. So all these years later to have our congresswoman from the 13th district in Detroit facing a similar thing, what is it that they’re afraid that they’re going to see? What is it that — what doesn’t the Israeli government — I mean I watched earlier Ali Velshi had on one the refused things, one of the Israeli army veterans. And he said, I was going to be her guide through Hebron, and I was going to take her down the main street of Hebron, where it’s now vacant. All the shops are gone. The Israeli army calls it a sterile street. That’s what he said right on this network, a sterile street because there are no Arabs around. Our members of Congress need to see that, and that’s what unfortunately they’re not going to be able to.”