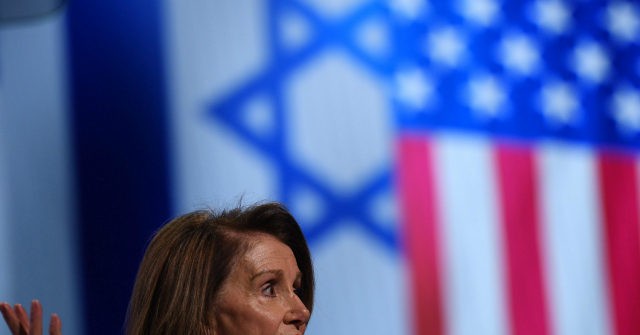 House Speaker Nancy Pelosi (D-CA) deviated from the sentiments of the far-left “Squad” in an interview with the Associated Press Friday, explaining that she will “not discourage travel to Israel” over the country’s initial decision to bar Reps. Rashida Tlaib (D-MI) and Ilhan Omar (D-MN).

Pelosi expressed her disappointment in Israel’s initial decision to bar the far-left lawmakers due to their ongoing support of Boycott, Divestment, Sanctions (BDS), blaming it on the “weakness of Netanyahu and the weakness of Donald Trump combined.”

“We have a deep relationship and long-standing relationship with Israel that can withstand Donald Trump and Benjamin Netanyahu,” Pelosi told the AP. “We cannot let their weaknesses stand in the way of our ongoing relationship.”

While the House speaker said she experienced “great, great, great sadness” because of Israel’s initial decision, she is not encouraging a boycott of the U.S. ally.

“Members will make their own decisions about this, but I would not discourage travel to Israel,” Pelosi said.

“We have a strong relationship with Israel as well as a deep love and respect for the people of Israel. And, again, this is not going to undermine that, try as President Trump will to do that,” she continued.

Pelosi’s remarks contrast those of Rep. Alexandria Ocasio-Cortez (D-NY), who quickly came to Tlaib and Omar’s defense and pledged to cease trips to Israel “until all members of Congress are allowed.” She also praised Sen. Bernie Sanders (I-VT) for floating the idea of cutting U.S. aid to Israel:

Folks may want to read extra deep into this, but I say this simply to acknowledge the courage it takes to make a statement like this.

From Warren to Castro to Bernie & others, we are lucky to have the leadership bench we have right now. We should praise all their great moments!

Visiting Israel & Palestine are key experiences towards a path to peace.

Sadly, I cannot move forward w scheduling any visits to Israel until all members of Congress are allowed. https://t.co/WTP5vnt5IH

Omar, who remains at the center of the controversy, echoed Sanders’ call, suggesting that the U.S. use aid as leverage as a response to what she believes is Israel’s mistreatment of Palestinians:

As many of my colleagues have stated in the last 24 hours, we give Israel more than $3 billion in aid every year. This is predicated on their being an important ally in the region, and the ‘only democracy’ in the Middle East.

Tlaib also took boycotting Israel to the extreme, begging in a letter to Israeli Interior Minister Aryeh Deri on Thursday that the country allow her to visit her grandmother. He reversed his decision Friday morning, but Tlaib opted to boycott Israel – and by consequence, her own grandmother – citing Israel’s “oppressive conditions.”

“Silencing me & treating me like a criminal is not what she wants for me. It would kill a piece of me,” she tweeted Friday.

“I have decided that visiting my grandmother under these oppressive conditions stands against everything I believe in–fighting against racism, oppression & injustice,” she added:

Silencing me & treating me like a criminal is not what she wants for me. It would kill a piece of me. I have decided that visiting my grandmother under these oppressive conditions stands against everything I believe in–fighting against racism, oppression & injustice. https://t.co/z5t5j3qk4H

President Trump reacted to Tlaib’s decision in a tweet Friday, noting that Tlaib’s grandmother emerged as the “real winner”:

Rep. Tlaib wrote a letter to Israeli officials desperately wanting to visit her grandmother. Permission was quickly granted, whereupon Tlaib obnoxiously turned the approval down, a complete setup. The only real winner here is Tlaib’s grandmother. She doesn’t have to see her now!