Despite Lil Nas X smashing records left and right with “Old Town Road” and Billy Ray Cyrus, not everyone is a fan.

Blake Shelton and Trace Adkins‘ collaboration, “Hell Right,” references the county-rap hit, and their sentiments about the song seem less than flattering.

LIL NAS X BREAKS BILLBOARD RECORD FOR MOST WEEKS AT NO. 1

Still, “The Voice” judge denied, through his rep, that he was shading Lil Nas X.

“It’s absolutely not throwing any kind of shade at Lil Nas X at all,” Shelton’s rep told Variety in a statement on Friday. “Blake says this literally has nothing to do with anything at all except how much the song is played. It could have been ‘Achy Breaky Heart’ or any other (overplayed) song.” 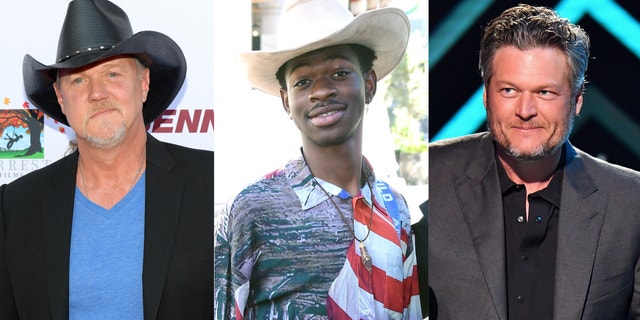 Shelton’s rep added, “Blake talked to Billy Ray and he thought it was funny.”

Shelton previously told Billboard of the track, “You can raise hell, or you can raise hell right. It’s about cutting loose and having fun the right way. I spend a lot of time in Los Angeles these days, but when I hear songs like this on the radio, I am immediately thinking about being back home and what I’d be doing if I was there. The first time I heard ‘God’s Country’ I was on my ranch in Oklahoma. As a guy who actually lives this lifestyle, ‘Hell Right’ hits me in the soul now just as much as ‘God’s Country’ did then.”

Neither Shelton nor Adkins actually wrote the lyric. The barnburner was penned by David Garcia, Brett Tyler and Michael Hardy.