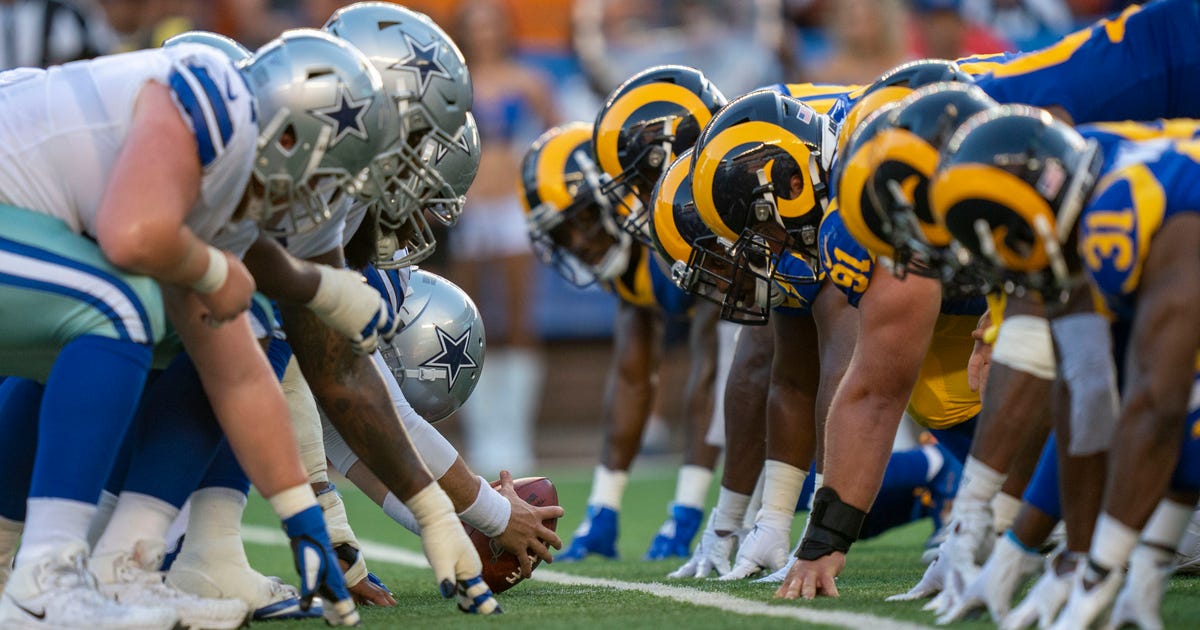 HONOLULU (AP) — Dak Prescott appears ready for the regular season, with or without Ezekiel Elliott.

The Dallas quarterback completed all five of his pass attempts in his only series, and the Cowboys came away with a 14-10 victory over the Los Angeles Rams on Saturday night.

Prescott dropped back to pass seven times, completed passes to five different receivers, had one short completion negated by an ineligible lineman downfield penalty and was sacked once.

“It’s always a challenge coming off your own goal line. We call that a ‘coming out situation.’ One of your goals is to get a first down and change field position. To be able to have a 13-play drive and cash it in for points was big for us,” Cowboys coach Jason Garrett said.

Through his first two preseason games, Prescott has completed all nine of his pass attempts.

It marked the first Dallas touchdown in a preseason game since Aug. 18, 2018. Dallas was held to three field goals in last week’s 17-9 loss at San Francisco to open the preseason.

With starting quarterback Jared Goff among the large number of Rams starters that did not make the trip to Hawaii, Blake Bortles got the start and finished 7 of 11 for 62 yards. His 7-yard scoring pass to JoJo Natson capped Los Angeles’ second drive, which was extended by a fumbled punt return by Dallas return man Reggie Davis and recovered by rookie Jake Gervase.

“Blake did a really good job, got us in and out of the right run calls and I thought it was exactly what we wanted to accomplish for him,” Rams coach Sean McVay said.

“I thought the first half was good, really,” McVay said. “The second half was really sloppy, not even close to the standards that we expect to operate with. I’m not even talking about whether we end up scoring points and I’m talking about not beating yourself with things that take no talent.”

Dallas (1-1) pulled back ahead late in the third quarter, when third-string quarterback Cooper Rush found Devin Smith for an 8-yard touchdown.

Pollard, who started in place of Elliott, finished with five rushes for 42 yards. Elliott, a two-time league rushing champion, missed his second preseason game while he continues his holdout. Alfred Morris, who signed with the team during training camp, saw his first action of the preseason and carried three times for 6 yards, all before halftime.

The teams met in the NFC Divisional round of last year’s playoffs. The Rams won 30-22 en route to an appearance in the Super Bowl.

Veteran tight end Jason Witten made his preseason debut after coming out of retirement — and the broadcast booth — last year. Witten was targeted just once on a third-down pass from Prescott on the first Dallas possession. Witten’s 10-yard reception moved the chains and set up Pollard’s 14-yard TD run for the game’s first points.

“It felt really good. I was very anxious to get out there and play,” said Witten, a 16-year veteran and 11-time Pro Bowler. “It is just the next step in the comeback. I worked really hard to get back in shape.

“I hold myself to a high standard, so I can say it was not perfect. I got a little antsy early but had a big third-down conversion on an option route.”

RETURN TO THE ALOHA STATE

The game marked the NFL’s first time back in Hawaii since the 2016 Pro Bowl was played at Aloha Stadium. Although the game was technically a home game for the Rams, fans of both teams jumped at the rare opportunity to see professional football in the 50th state.

“What a great atmosphere and environment it was,” McVay said. “The fans were awesome from start to finish.”

Garrett said he took a moment during Saturday’s game to reflect upon the history that has taken place at Aloha Stadium.

Cowboys second-year linebacker Chris Covington went down with an undisclosed injury while covering the opening kickoff. He was attended to by Dallas’ training staff for a few minutes, but was able to walk off on his own.

Rams second-year linebacker Micah Kiser suffered pectoral injury in the first half that did not allow him to return to the game, according to McVay.

Cowboys: Return home to face the Houston Texans on Saturday on Aug. 24.

Rams: Host Denver in their next-to-last preseason game on Aug. 24.