IndyCar driver Felix Rosenqvist was rushed to a hospital after he was involved in a dramatic five-car wreck soon after the start of a race at Pocono Raceway in Pennsylvania.

An ambulance took the Chip Ganassi Racing driver, who hails from Sweden, to the hospital after the wreck triggered by Takuma Sato on the first lap.

Sato, the 2017 Indianapolis 500 winner, said he thought he was all clear as he tried to make an aggressive pass early in the race.

“I’m not really over-aggressive,” he said.

IndyCar medical director Geoffrey Billows said Rosenqvist was walking and was expected to be fine. 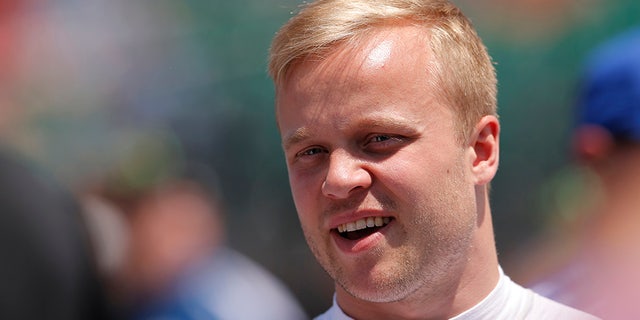 IndyCar driver Felix Rosenqvist was hospitalized after he was involved in a five-car wreck at Pocono. (Jeffrey Brown/Icon Sportswire via Getty Images, File)

Rosenqvist, 27, has been in motorsports for over 10 years.

Rosenqvist first found a home in a single seater in Asia in 2008 before moving on to Europe as a driver in the Formula 3 feeder series, where he won 13 races and the championship in 2015.

A year later, Rosenqvist found himself in the Indy Lights series, a step below Indy cars. Rosenqvist made a name for himself by winning three of the 10 events he started, and he made a crucial connection with the CGR team by testing for them at Mid-Ohio in 2016 and 2017.

Rosenqvist won a pair of races in Formula E a year ago before nabbing a highly coveted seat with Ganassi’s Indy program.