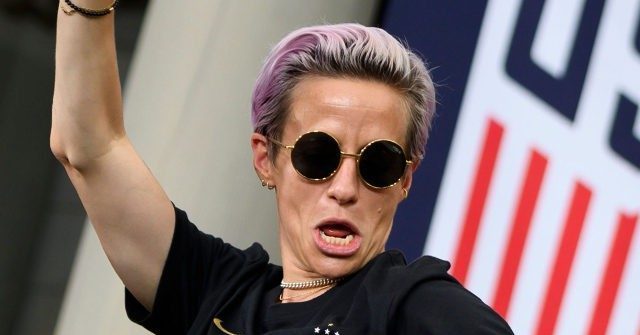 U.S. Women’s National Team star Megan Rapinoe is again on the attack against President Trump, this time in a recent interview rehashing her Twitter “feud” with the president.

Rapinoe insisted in the interview that the U.S. women’s team is “everything he loves with the exception that we’re powerful, strong women,” the Hill reported.

The World Cup-winning team’s co-captain added that Trump was having a hard time deciding how to approach her team.

“And he was having a really hard time – you could see in these sets of tweets: you hate us, you love us, you want us to come [to the White House] – and you are threatening us, all at the same time,” she said.

Rapinoe did say that she worried that her feud with Trump might negatively affect her team, especially when she began yelling that she would never go to the “fucking White House.” But she added that few of her teammates would go, either.

The player noted that she is somewhat anti-authority in outlook, “when there’s a person who is abusing their power or manipulating people, whether it’s a teacher when I was younger or Donald Trump now, there’s nothing that fires me up and grinds my gears more. I was just like: ‘No. That’s not happening.’”

Rapinoe also confessed that her father and other family members were Trump voters and her constant anti-Trump tirades did cause a little stress in the family.

“There’s been some major blow-ups. There’s definitely been some dust-ups,” she said of her family dynamics. Still, she claimed that she still talks to them despite their voting habits.

Indeed, she can’t understand how her family can want to vote for Trump when she is such an out and proud lesbian.

“I don’t get it. How are you simultaneously as proud as punch of me, and watching Fox News all the time, [who are doing] takedowns of your daughter?’ That’s why I’m like: ‘You guys need to go to therapy,’” Rapinoe said of her family.