Golfer Phil Mickelson had an electrifying Sunday, and that was before he even stepped on the course.

The pro-golfer said on Twitter that lightning struck the hotel where he was staying in suburban Chicago, sparking an evacuation.

“How’s this for crazy? My hotel was struck by lighting(sic), I was on top floor,we were evacuated and the place is on fire(only thing of mine on fire this week.) I can’t get back into my room and may miss my tee time because I am without clubs and clothes,” he wrote.

The hotel is located right next to the golf course where the BMW Championship is being held at the Medinah Country Club in Medinah, Ill. 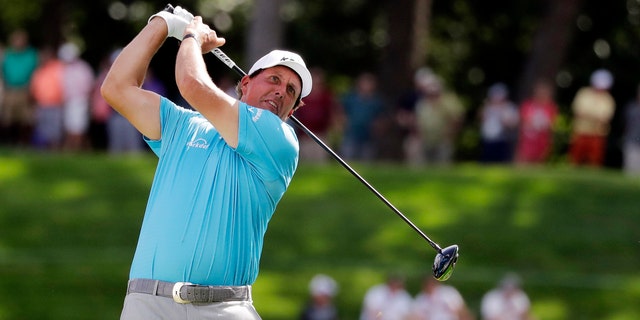 Phil Mickelson watches his tee shot on the 18th hole during the second round of the BMW Championship golf tournament at Medinah Country Club, Friday, Aug. 16, 2019, in Medinah, Ill. (AP Photo/Nam Y. Huh)

A sports reporter from NBC Chicago shared a photo of emergency officials responding to the hotel, with firefighters seen on the roof.

Mickelson posted an update to Twitter, saying the EMTs were “awesome” and that he was going to make it for his tee time of 10:52 a.m.

“Turns out my clubs acted as a fire retardant,” he wrote. “Lucky me”

Mickelson eventually got to the course in time to change shoes in the parking lot before heading to the range to warm up, pausing only to answer the phone when his wife called to check on him, according to the Associated Press.

He told her at one point, “I tweeted it.”

His sister, Tina, also replied to his initial tweet saying “Bro-you can’t tweet this stuff until AFTER you call Mom to tell her you’re ok.”

Severe storms in the Chicago area on Sunday morning have caused the final round to be pushed back and started from both tees.