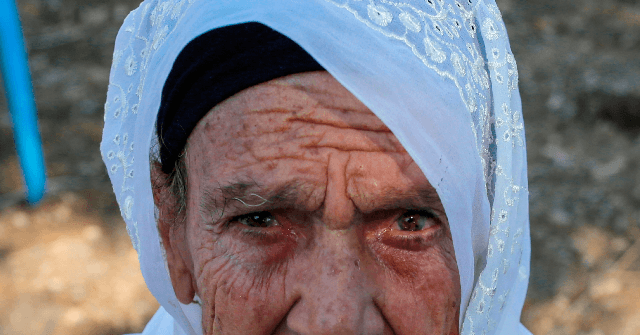 Rep. Rashida Tlaib’s (D-MI) grandmother hit back at President Trump this week for calling her the “real winner” after Tlaib chose not to visit her in Israel.

“Trump tells me I should be happy Rashida is not coming,” Muftia Tlaib reportedly said. “May God ruin him.”

On Friday, President Trump tweeted about Tlaib’s request asking Israeli officials to allow her to see her 99-year-old grandmother on a humanitarian visit.

Rep. Tlaib wrote a letter to Israeli officials desperately wanting to visit her grandmother. Permission was quickly granted, whereupon Tlaib obnoxiously turned the approval down, a complete setup. The only real winner here is Tlaib’s grandmother. She doesn’t have to see her now!

“Rep. Tlaib wrote a letter to Israeli officials desperately wanting to visit her grandmother. Permission was quickly granted, whereupon Tlaib obnoxiously turned the approval down, a complete setup,” he wrote, adding, “The only real winner here is Tlaib’s grandmother. She doesn’t have to see her now!”

On Thursday, Breitbart News reported that the Israeli government decided not to allow Tlaib and Rep. Ilhan Omar (D-MN) to enter the country.

Following the decision, Israeli Prime Minister Benjamin Netanyahu said in a statement Thursday that Israel is open to criticism, but the law prohibits them from allowing entry to anyone calling for boycotts against them.

Congresswomen Tlaib and Omar are leading activists in promoting the legislation of boycotts against Israel in the American Congress. Only a few days ago, we received their itinerary for their visit in Israel, which revealed that they planned a visit whose sole objective is to strengthen the boycott against us and deny Israel’s legitimacy. For instance: they listed the destination of their trip as Palestine and not Israel, and unlike all Democratic and Republican members of Congress who have visited Israel, they did not request to meet any Israeli officials, either from the government or the opposition.

The Prime Minister also noted that the organization funding Tlaib and Omar’s trip to Israel was Miftah, a group known as “an avid supporter of BDS [Palestinian-led Boycott, Divestment and Sanctions movement], and among whose members are those who have expressed support for terrorism against Israel.”

On Friday, Tlaib wrote about her decision not to go to Israel on Twitter, citing the country’s “racism” and “oppression” as the main reasons why she chose to forgo her trip:

Silencing me & treating me like a criminal is not what she wants for me. It would kill a piece of me. I have decided that visiting my grandmother under these oppressive conditions stands against everything I believe in–fighting against racism, oppression & injustice. https://t.co/z5t5j3qk4H

“When I won, it gave the Palestinian people hope that someone will finally speak the truth about the inhumane conditions,” she wrote. “I can’t allow the State of Israel to take away that light by humiliating me & use my love for my sity to bow down to their oppressive & racist policies.”