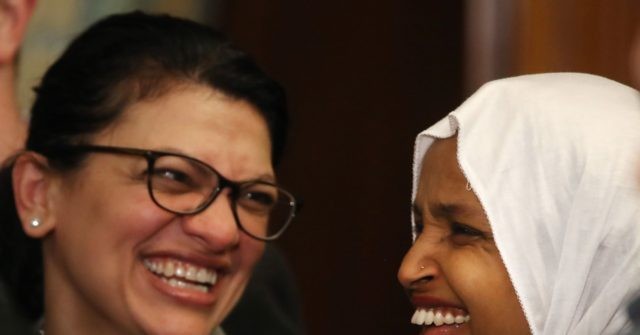 Reps. Ilhan Omar (D-MN) and Rashida Tlaib (D-MI) both reportedly shared an antisemitic cartoon by an artist who participated in Iran’s Holocaust denial contest on their respective Instagram accounts on Friday, according to Forward editor Batya Ungar-Sargon.

Ungar-Sargon noticed that Omar and Tlaib had each shared the image on their Instagram “stories.” Both were barred from entering Israel Thursday because of their support for the “boycott, divestment, sanctions” (BDS) movement. Tlaib then applied for a humanitarian visa so she could visit her grandmother in a Palestinian village, promising not to promote boycotts of Israel while traveling there. Her request was granted, but she then turned down the offer Friday, claiming that Israel was trying to silence her.

The cartoon Omar and Tlaib reportedly shared shows Israeli Prime Minister Benjamin Netanyahu with his hand over Tlaib’s mouth, and U.S. President Donald Trump with his hand over Omar’s mouth. Both leaders are shushing the congresswomen. A Star of David — the symbol of the Jewish faith — appears in the center of the image, implying that Jews are responsible for the act of silencing.

Oof. Looks like both Rep. Omar and Rep. Tlaib shared this awful Carlos Latuff cartoon in Instagram stories yesterday. In 2006, Latuff came in second in Iran’s International Holocaust Cartoon Contest, which is a thing that exists, in case you thought the TL couldn’t get any worse. pic.twitter.com/uwyBPAsz7T

The image is antisemitic on its face. The theme of Jews controlling world leaders, who in turn do their bidding, especially in suppressing criticism, has been a common theme in antisemitic propaganda since Nazi Germany, and remains a frequent feature of antisemitic cartoons in the Arab and Muslim world. The New York Times faced criticism for a similar antisemitic cartoon it published in its international edition in April.

Making matters worse, as Ungar-Sargon pointed out, is the fact that this particular cartoonist, Carlos Latuff, won second place at a contest held by Iran in 2006 at which contestants drew caricatures denying the Holocaust. The contest was held in response to a Danish newspaper’s contest to draw images of Mohammed, which is prohibited by Islamic law, to challenge the self-censorship of Western media. Iran has promoted Holocaust denial as official policy; its president at the time, Mahmoud Ahmadinejad, was notorious for his habit of denying the Holocaust.

Latuff acknowledged the latest controversy on Saturday evening by re-posting his Holocaust cartoon:

To whom it may concern: this is the cartoon I participated in the International Holocaust Cartoon Competition (2006) and the interview I gave in 2008 about it for the Jewish Daily @jdforwardhttps://t.co/eSRuKMIjIO pic.twitter.com/WhSROMJMl0

The image minimizes the Holocaust by suggesting that Palestinians are victims of another Holocaust because of the security barrier Israel was forced to build to prevent Palestinian suicide bombings and sniper attacks.

Latuff later admitted to the Forward in 2008 that such comparisons are “inaccurate,” but defended them as legitimate criticism of Israel. As for the use of the Star of David in his cartoons, Latuff told the Forward, “[I]t’s not my fault if Israel chose sacred religious motifs as national symbols.”