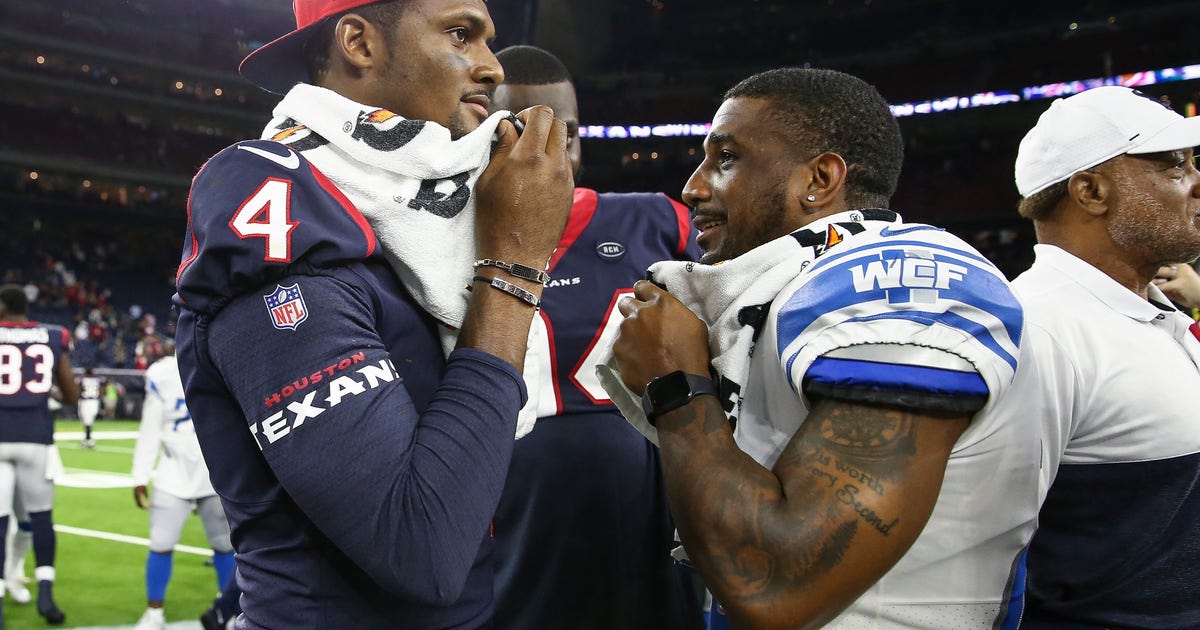 HOUSTON (AP) — Houston’s Deshaun Watson and DeAndre Hopkins knew they weren’t going to get much playing time on Saturday night so they were intent on making the few plays they got count.

“Just trying to go out there and be perfect,” Hopkins said. “We don’t have many plays so those plays that you do have, you want to make them the best.”

Watson took advantage of one series in his preseason debut, looking sharp in directing a 75-yard drive capped by a 4-yard touchdown pass to Hopkins to help the Houston Texans to a 30-23 win over the Detroit Lions.

“It felt great to be back out there, get some live action and try to get myself ready to prepare for the real season,” Watson said. “Each game I try to make sure I’m focused and locked in. Whenever my opportunity comes, when I step on that field I try to take advantage of it.”

Watson, who sat out in a loss to Green Bay last week, was 5 of 7 for 60 yards and scrambled once for 7 yards. After being sacked an NFL-high 62 times last season, the third-year player had plenty of time to throw while facing a Lions defense which opened the game with the bulk of its starters.

Hopkins, also making his preseason debut, had two receptions for 17 yards and shook off Detroit’s Quandre Diggs to get open and make the TD catch that put Houston up 7-0.

Detroit quarterback Matthew Stafford didn’t play for the second straight week, with the Lions instead starting Josh Johnson. Johnson was signed a week ago after backup Tom Savage suffered a head injury in the team’s preseason opener against the Patriots.

Coach Matt Patricia was asked if Stafford would play next week.

“I’m not going to get into things too far in advance, but we’ll see where we’re at this week,” he said.

Johnson was 9 of 18 for 85 yards with an interception and Patricia said he appreciates the work he’s done in the short time he’s been with the team.

“It’s hard, but he’s doing a good job of grasping the offense,” Patricia said. “Josh is right there in that same mix and trying to execute the way we want him to.”

The Lions had a chance to tie it on the last play of the game, but a pass by David Fales was knocked down in the end zone.

Tight end T.J. Hockenson, the eighth overall pick in this year’s draft, had one reception for 22 yards, but also received a penalty for a crackback block. Running back Kerryon Johnson started and had three carries for 16 yards in a little more than a quarter.

Patricia thought that his team looked better against Houston than it did in a 31-3 loss to the Patriots last week, but he’s still looking for the Lions to clean up their mistakes.

“There were definitely some more competitive snaps out there on the field this week,” he said. “There were some players that stood out in making those really good plays, which was great. In the end, too many bad plays, obviously. Penalties were a big problem. We can’t have it.”

Several of Houston’s defensive starters also played briefly, including linebacker Whitney Mercilus, who sacked Johnson and caused a fumble on Detroit’s first series. Defensive end J.J. Watt did not play for the second straight game despite practicing all week after recovering from tightness in his groin.

Detroit cornerback Darius Slay broke up two passes in the first quarter and Jalen Reeves-Maybin had five tackles, including one for a loss, and defended a pass.

The Texans were up 10-3 in the second quarter when Steven Mitchell fumbled after a 4-yard reception and Will Harris scooped it up and returned it 19 yards to tie it.

Webb connected with Vyncint Smith on a 31-yard touchdown pass just before halftime to put Houston on top 17-10.

Fales took over at quarterback for the Lions on the second series of the third quarter and threw a 5-yard touchdown to Zach Zenner, but the 2-point conversion failed to leave Detroit down 20-16.

Buddy Howell’s 1-yard touchdown run extended Houston’s lead to 27-16 with about 8½ minutes left and the Lions got within 27-23 on a TD run by Mark Thompson a couple of minutes later.

Houston tight end Jordan Thomas caught what appeared to be a touchdown pass from Webb in the second quarter and ran off the field and halfway up the tunnel with teammates chasing him. Thomas had to hustle back after his celebration jog when an offensive holding penalty nullified his score and the Texans had to run another play.

Harris on his fumble return for a score: “At this point, it’s routine. We always try to practice getting the ball out and getting the ball back by any means. That’s been a big point of emphasis for our defense.”

Lions: Host the Bills on Friday.