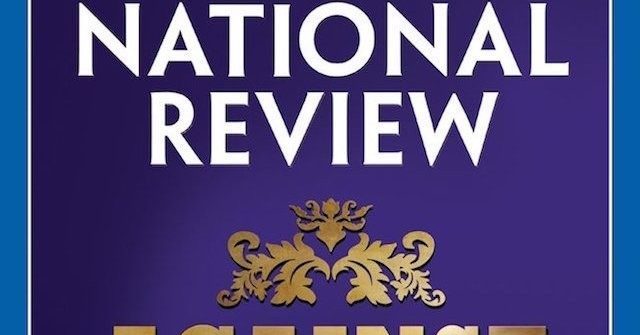 National Review editor Rich Lowry, who was the face of the failed February 2016 “Against Trump” edition of the magazine, is now authoring a book in which he makes the case for nationalism, a key component of President Trump’s populist-nationalist movement he formerly trashed.

Lowry is promoting his new book, The Case for Nationalism, expected in November, about three years after he and a variety of conservative beltway figures whose careers he advanced scoffed at Trump’s populist-nationalist movement and his supporters in the 2016 presidential election.

Harper Collins, which is publishing Lowry’s book, confirmed that he is receiving an advance but would not reveal the dollar amount, writing in an email, “As policy, we never disclose authors’ advances.”

Lowry’s contingent of the conservative establishment argued in their 2016 “Against Trump” issue that their advocacy against Trump and the nationalist-populist movement was to “hold up this banner and put this flag in the ground for principled conservatism whether it’s popular or not.”

A month after the “Against Trump” attack, Lowry’s National Review published a cover story by Kevin Williamson in which the disenfranchised white working-class — devastated by decades of free trade and a globalist economic policy — was told that their struggling communities “deserve to die.”

An op-ed by Chadwick Moore for Breitbart News detailed the attack:

The 2016 election ignited the long-simmering discontent of Americans on the received-end of lectures from politicians like Kaine. As they saw it, the last twenty years was a cycle of betrayal, abandonment, and deceit. First, America’s governing and financial elites stole their livelihoods with destructive trade deals, then lectured them about how great free trade has really been for them, then they ignored communities like Danville as they sunk deeper into decline. Finally—when these “deplorable” Americans chose candidate Donald Trump over the advice of their betters on the political right and the left—they were told, in the words of National Review’s Kevin Williamson, that their broken communities “deserve to die.” [Emphasis added]

In a July 2016 piece by Lowry, the National Review editor slammed Trump’s economic nationalist agenda on trade for promising to impose tariffs on Chinese imports, oppose the Trans-Pacific Partnership (TPP) free trade deal, and vowing to look out for America’s workforce rather than providing multinational corporations with easier avenues to offshore U.S. jobs.

Lowry derided the economic nationalist model as an “assault on the American free-trade regime” and used a study from the economic libertarian Cato Institute to argue that free trade is not the cause for U.S. manufacturing’s decline:

The Trump/Sanders story is that the middle class has been devastated by trade, especially in the manufacturing sector. [Emphasis added]

The truth is, if the metric is employment, U.S. manufacturing was in decline before the advent of the North American Free Trade Agreement or the World Trade Organization. As Scott Lincicome of the Cato Institute points out, the absolute number of manufacturing workers has been dropping since 1979. [Emphasis added]

There is no doubt that trade has downsides, but Trump won’t acknowledge the significant benefits: Cheap goods are a boon to consumers; domestic manufacturers use imports as inputs in their own products; and, as the U.S. loses less sophisticated operations, it focuses on higher-skilled, more productive manufacturing. [Emphasis added]

During a famous spat with Trump supporter Andrea Tantaros, Lowry argued that GOP voters must not pick the populist-nationalist agenda of Trump for the 2016 Republican presidential nomination and instead choose a “principled Reagan conservative.”

TANTAROS: Rich, do you see why the voters are angry? Because the establishment has put up candidates like McCain and Romney who are not conservatives in the past. So this is really bizarre…

TANTAROS: Because the [Republican] party has shifted into a nationalist mode and the voters are angry and they’ve been discounted and insulted by writers at your publication. It’s really, really rude. It’s really awful to treat the voters that way.

During a February 2016 conversation with ardent Never Trumper and neoconservative Bill Kristol, Lowry said William F. Buckley Jr. would have been opposed to Trump for his “crude populism” and said GOP voters supporting Trump did not have a “firm devotion” to conservatism — all while attacking populist-nationalist figures like Pat Buchanan and Ross Perot, who warned against the rise of globalism.

Whenever National Review makes a big statement in the post-Buckley era, you hear people say ‘Well, Buckley would have never done that or he wouldn’t have supported that’ and a lot of times we just don’t really know … but in opposition to Donald Trump, I’m absolutely convinced that he would be there with us because National Review has always stood up against this kind of crude populism. And there have been various iterations of it, obviously, across the decades … George Wallace, Pat Buchanan, to Ross Perot.

“A lot of our voters don’t seem to have a particularly firm devotion to our ideas as [we] understand them,” Lowry said. “And two, a lot of conservative opinion leaders turn out maybe to be less conservative than we would have thought.”

The nationalist-populist movement, championed by former Attorney General Jeff Sessions in recent decades, which drove Trump to victory, has sought to reshape the GOP and put lawmakers in line with the sentiment of Republican voters on tariffs, a reduction to all immigration, a non-interventionist foreign policy agenda, and away from the conservative beltway’s preferred  focus on tax cuts, free trade, and foreign interventionism.