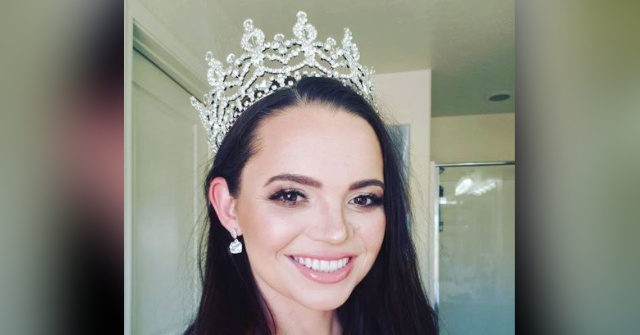 Katie Williams is disappointed that just days before the Ms. America pageant she was stripped of her Ms. Nevada State 2019 title and denied the chance to compete for the big prize on Saturday in Las Vegas. But she’s not backing down on her conservative views and values or her support for President Donald Trump.

“Unfortunately, because of my belief system, I was disqualified,” Williams said in an interview on SiriusXM’s Breitbart News Tonight with hosts Rebecca Mansour and Joel Pollak. “My First Amendment right was stifled.”

Williams said she is not intimidated by Ms. America Pageant, which has said she did not follow pageant rules of having two separate social media accounts — one for pageant-related posts and the other for her personal posts, which often include political opinions.

Williams said she did what the pageant asked her to do on social media but believes her conservative views and support for Trump caused her to be disqualified.

“I think that’s what so disheartening about it,” Williams said. “I’m a U.S. Army veteran. I’m a mom and a wife. I’m a personal training coach. I help a lot of people. I inspire people.”

“My whole mission in life is to encourage people to stand up for what they believe in,” Williams said. “And the pageant was kind of a way for me to showcase that.”

“I think that was the biggest issue for me,” Williams said. “There were other contestants posting things that were more on the liberal viewpoint, yet when I did it — and of course it was a conservative viewpoint — that’s when the problem actually arose.”

When asked about her future pageant ambitions, Williams said she is moving on.

“I don’t think I’m going to probably compete in any more pageants,” Williams told Breitbart News Tonight. “I think that part of my life is over.”

But she said she will continue her “fight against censorship of the conservative viewpoint.”

To that end, Williams is speaking out whenever she gets the chance, including in a seven-minute video she posted on social media.

In the video, she shares how the pageant repeatedly contacted her to request she delete political posts on social media. Williams said she is tired of being labeled “crazy” and “right wing” because she supports the sitting president.

“Here’s the deal,” Williams said in the video. “I stand by everything I’ve posted. I don’t think I’ve posted anything wrong. And if anyone wants to go and look at my page, feel free. I leave it public for a reason.”

“I do not apologize for who I am,” Williams said. “I’ve spent so many years of my life wondering what people thought of me that I’m just at a point in my life where I just don’t care.”

“So I don’t apologize for what I’ve posted,” Williams said. “Not today, not tomorrow, not ever. Because that’s who I am.”