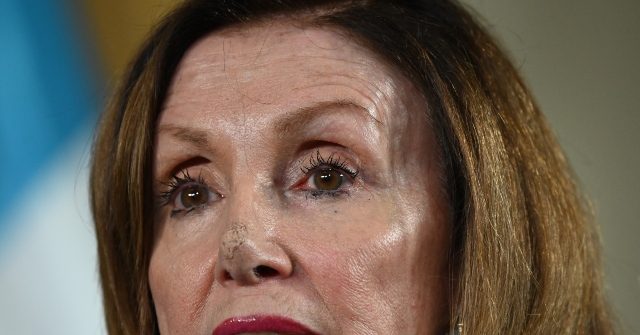 Armed with signs that read “We can’t wait,” demonstrators stood on chairs while shouting, “Which side are you on, Pelosi? Impeach!” inside the InterContinental hotel, where the San Francisco Democrat Party members honored the longtime California lawmaker with a lifetime achievement award.

“Impeach Trump now!” shouted activists, who initially had been quietly seated in the audience. One woman, Thais Marques, screamed into the packed room that her “people are being killed by white supremacists” across the country. She demanded action from Pelosi. Another activist said, “We are your constituents.”

Pelosi supporters tried to drown out the activists, chanting, “Let her speak” and waving signs of Pelosi’s face superimposed onto Rosie the Riveter’s likeness. Others opted to say “hush” in deep, hoarse voices, while others screamed, “Sit down!”

Pelosi continued with her remarks and quipped that the energy in the ballroom was “making me feel right at home,” a remark that was met with raucous cheers from the crowd.

While San Francisco police officers and security hauled the far-left activists out of the venue, it is unclear if any were taken into custody. Not only were protesters causing trouble inside the hotel, but outside of it as well.

CREDO Action campaign manager Nicole Regalado, demonstrating against Pelosi’s refusal to back impeachment, shouted into a megaphone from outside:

Speaker Pelosi is right inside about to receive a lifetime achievement award, but her legacy is at a crossroads. While Donald Trump empowers white supremacists who are gunning down our communities, locks up migrant children and families in concentration camps, strips away health care protections for transgender people, and cuts millions of women off of accessing health care from Planned Parenthood.”

BREAKING: #WeCantWait Impeachment protest outside the San Francisco Democratic Party’s “Heart of the Resistance” dinner where @SpeakerPelosi is receiving a lifetime achievement award.

“Basically, Trump is bad news. I hope [Pelosi] hears us and starts the impeachment process,” another protester said. “He needs to be held accountable for all the bad that he has done.”

Despite 125 House Democrats publically supporting impeachment, Pelosi has remained firmly opposed to the move, instead urging committee investigators to continue their obstruction and corruption investigations into President Trump.

“We will proceed when we have what we need to proceed — not one day sooner,” Pelosi told reporters when pressed about her position on ousting the president in July.

“Everybody has the liberty and the luxury to espouse their own position and to criticize me for trying to go down the path in the most determined, positive way,” the California Democrat added. “Again, their advocacy for impeachment only gives me leverage.”

In an interview last month with ABC News, House Judiciary Committee chairman Rep. Jerry Nadler (D-NY) said his panel is “investigating whether to approve articles of Impeachment before the committee.”

Speaking to MSNBC earlier this month, the New York Democrat said his committee could recommend bringing articles of impeachment against President Trump by late fall. “I think that we will probably get decisions by the end of October, maybe shortly thereafter we’ll get — we’ll have hearings in September and October with witnesses who are not dependent on the court proceedings, and we’ll do it through the fall,” he said. “If we decide to report articles of impeachment, we could get to that in the late fall, perhaps — in the latter part of the year.”