A massive “raft” of volcanic rock the size of 20,000 football fields has been floating across the Pacific Ocean toward Australia — and may bring a vast array of marine life to the Great Barrier Reef.

The reef saw an 89 percent decrease in new corals following mass bleaching — when unusually hot water destroyed much of its colorful algae, a source of food — in 2016 and 2017.

Sailors had first discovered the giant sheet of volcanic rock produced by an underwater volcano near the Pacific Island of Tonga on August 9, according to the NASA Earth Observatory. 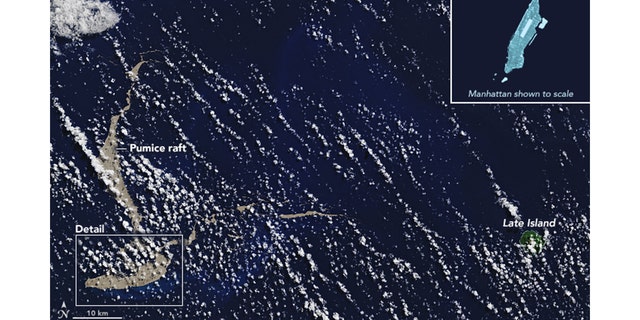 A massive pumice “raft” the size of Manhattan has been floating across the Pacific Ocean toward Australia. (NASA)

One week later, Australian couple Michael Hoult and Larissa Brill said they came across the pumice first-hand while sailing to Fiji, when volcanic rocks between the rudder and hull jammed the boat’s steering.

“We entered a total rock rubble slick made up of pumice stones from marble to basketball size,” the couple said. “It was a bit of a mystery, we didn’t know how deep it was [or] if we were sailing over a volcano that was active at that moment. It looked almost like there was more coming up, bubbling up from underneath,” the couple wrote on Facebook.

Since the encounter, the couple has been working with Queensland University of Technology (QUT) geology professor Scott Bryan by taking samples and pictures of the unique volcanic rock formation.

Bryan said marine creatures such as corals, crabs, snails, worms and barnacles could hitch a ride on the “raft” as it makes its way towards Australia, calling it a “potential mechanism for restocking the Great Barrier Reef.”

He added, “Based on past pumice raft events we have studied over the last 20 years, it’s going to bring new healthy corals and other reef dwellers to the Great Barrier Reef.”

He also said its one-way nature could help to promote regeneration. 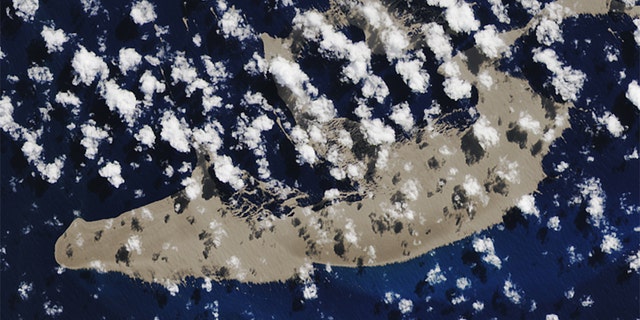 A closer look at the sheet of volcanic rock making its way toward the Great Barrier Reef. (NASA)

Scientists have said the “raft,” which was about 90 percent underwater, was expected to make its way toward Australia within the next seven to twelve months.

“It’s the right timing. So it will be able to pick up corals and other reef-building organisms, and then bring them into the Great Barrier Reef,” Bryan told the Guardian. “Each piece of pumice is a rafting vehicle. It’s a home and a vehicle for marine organisms to attach and hitch a ride across the deep ocean to get to Australia.”