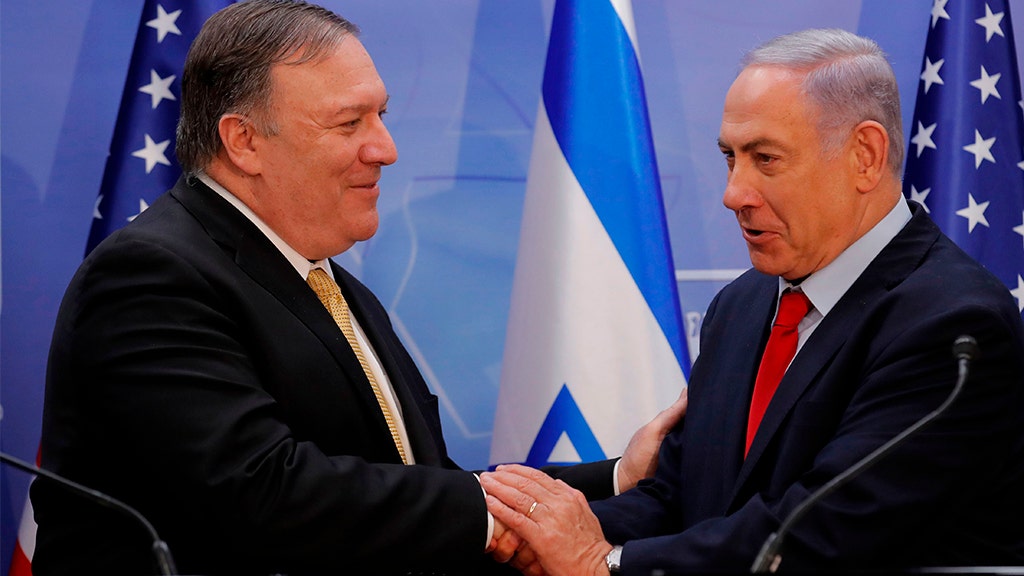 Secretary of State Mike Pompeo said Sunday he supports “Israel’s right to defend itself from threats posed by the Iranian Revolutionary Guard Corps,” after the Israeli military carried out an attack on targets inside Syria on Saturday in what it described as a successful effort to thwart a “very imminent” Iranian drone strike.

Pompeo tweeted that he spoke with Israel’s Prime Minister Benjamin Netanyahu on Sunday regarding the airstrikes in Syria.

He wrote, “I expressed my support for Israel’s right to defend itself from threats posed by the Iranian Revolutionary Guard Corps & to take action to prevent imminent attacks against Israeli assets.”

Pompeo also tweeted, “We discussed how Iran is leveraging its foothold in Syria to threaten Israel and its neighbors. The Prime Minister Netanyahu noted that Israel would strike IRGC (The Islamic Revolutionary Guard Corps) targets threatening Israel, wherever they are located.”

Saturday’s airstrike appeared to be one of the most intense efforts by Israeli forces to tamp down Tehran’s military action in the Damascus area and triggered anti-aircraft fire by Syrian forces.

Lt. Col. Jonathan Conricus, a military spokesman, told The Associated Press that Israeli officials had been monitoring a plot for several months in which they believed the Iranian Revolutionary Guard’s secretive Quds force, in conjunction with allied Shiite militias, had been planning to send explosives-laden attack drones into Israel.

The Iranians initially attempted to put the plan into motion on Thursday but Israeli forces stopped them, Conricus said. They were said to have tried again late Saturday, prompting the airstrike.

“We were able to thwart this attack with fighter jets,” Conricus said, adding that military forces near the Syrian frontier were on high alert.

Netanyahu tweeted Saturday, “In a major operational effort, we have thwarted an attack against Israel by the Iranian Quds Force & Shi’ite militias.”

The prime minister issued a warning to Israel’s enemies in Iran, writing, “Iran has no immunity anywhere. Our forces operate in every sector against the Iranian aggression.”

Netanyahu also said he directed Israeli forces to “be prepared for any scenario,” adding, “We will continue to take determined and responsible action against Iran and its proxies for the security of Israel.”

A top Iranian general, who Israel claimed personally oversaw the training, funding and preparation for the drone attack that Israel thwarted Saturday, warned Israel on Sunday that its strikes against Iran would not be tolerated much longer, according to The Times of Israel.

“These insane operations will surely be the last steps of the Zionist regime,” Qassem Soleimani, commander of the Quds Force, reportedly said.

POMPEO SAYS ‘NO INDICATIONS’ THAT IRAN IS CHANGING ITS ‘MALIGN BEHAVIOR’

Soleimani made the statement hours after Hezbollah leader Hassan Nasrallah threatened Israel with a counterattack, reportedly saying the Israeli strike in Syria killed two members of the militant group.

Israeli forces in the north reportedly have remained on high alert amid fears of a retaliatory attack. Netanyahu held an emergency meeting with defense officials early Sunday morning because of the heightened tensions.

Israel has acknowledged carrying out hundreds of airstrikes in Syria in recent years, most of them aimed at arms shipments believed to be headed from Iran to Hezbollah, its Shiite proxy. Direct fighting between Israel and Iranian forces has been rare.

Fox News’ Vandana Rambaran and The Associated Press contributed to this report.