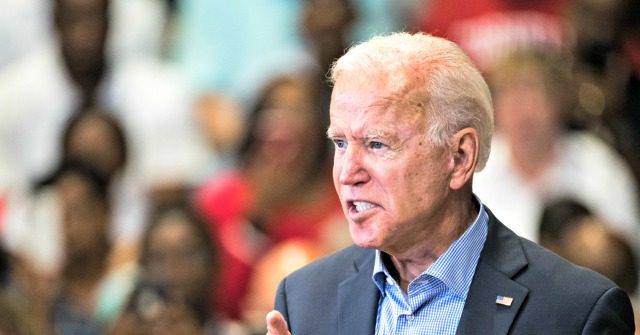 Speaking to a crowd, Biden accused Trump of “taking away automatic citizenship of children of some of our military members serving overseas.”

“Our service men and women give everything to this country and this is the respect that President Trump shows for their service,” Biden said.

Biden’s accusation stems from a new guidance released by the United States Citizenship and Immigration Services (USCIS) agency that is set to impact only about 20 to 25 children every year, officials confirmed.

Far from Biden’s claim, the USCIS rule does not revoke the citizenship of servicemembers’ children born abroad, but rather puts in place a system for which those parents apply for citizenship for their child.

The rule seeks to end the process of automatic citizenship for the children of beneficiaries of birthright citizenship and birth tourism who do not have a residence in the U.S. and whose children have not lived in the country.

Today, these second-generation “anchor babies” are provided with automatic American citizenship, despite having no connections to the U.S., solely because their parents benefited from birthright citizenship and birth tourism. There are about 4.5 million anchor babies in the U.S. with potentially countless more living abroad who have been allowed to transmit their citizenship to their children as well.