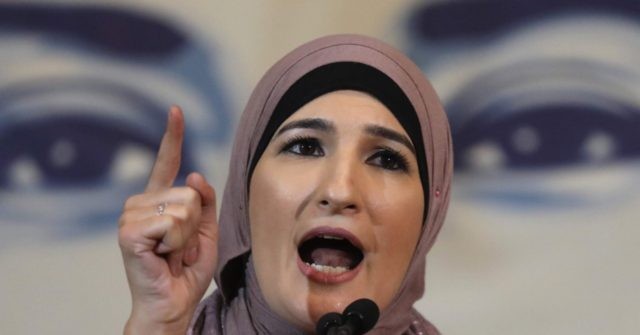 Linda Sarsour, an anti-Israel leader of the Women’s March whom critics have accused of antisemitism, has endorsed socialist Sen. Bernie Sanders (I-VT) for president in 2020.

On Saturday, Sep. 7, Sarsour retweeted a Sanders tweet of a clip in which she endorsed him, saying, “”I would be so proud to win, but also to make history and elect the first Jewish American president this country has ever seen and for his name to be Bernard Sanders.”

“I would be so proud to win, but also to make history and elect the first Jewish American president this country has ever seen and for his name to be Bernard Sanders.” –@lsarsour pic.twitter.com/INPRlvmMur

Sarsour’s embrace of Sanders’s Jewishness is particularly ironic. She has worked with the notorious antisemite and racist Louis Farrakhan, speaking at a Nation of Islam event and defending his organization. Under her leadership, the Women’s March developed ties with Farrakhan and the Nation of Islam, including the alleged use of members of the movement to provide security at Women’s March events. Saraour and other leaders later apologized for having been slow to criticize antisemitism, but did not condemn Farrakhan or his long record of antisemitic hatred.

In addition, the Palestinian-American Sarsour has said left-wing women who support Israel cannot be feminists. She supports the “boycott, divestment, and sanctions” (BDS) movement, which singles out Israel, and defended Rep. Ilhan Omar (D-MN) using the antisemitic “dual loyalty” theme, saying Omar’s critics on the left “masquerade as progressives but always choose their allegiance to Israel over their commitment to democracy and free speech.”

In 2017, Sarsour called for “jihad” against the Trump administration. One of her mentors, Imam Siraj Wahhaj, was  “said to be an ‘unindicted co-conspirator’ of the 1993 World Trade Center bombings,” Breitbart News reported last year. His son, Siraj Ibn Wahhaj, was arrested last year for allegedly training children to carry out school shootings.

Sanders — who has belatedly embraced his Jewish identity, after referring to himself as Polish in his 2016 race — has called the government of Israel “racist,” and said that he would remove the U.S. embassy in Israel from Jerusalem if elected. He also supported Omar after President Donald Trump criticized her and fellow “Squad” members earlier this year — and long after Omar had established a record of antisemitic rhetoric after her election to Congress.

Sarsour was also a surrogate for Sanders during the 2020 campaign, when he lost the primary to Hillary Clinton. Sanders also inspired several other anti-Israel activists who have gone on to play significant roles on the national stage, including Rep. Rashida Tlaib (D-MI), whom Sanders backed in her 2018 primary race. Rep. Alexandria Ocasio-Cortez (D-NY), who has been harshly critical of Israel, also supported Sanders in the 2016 election.