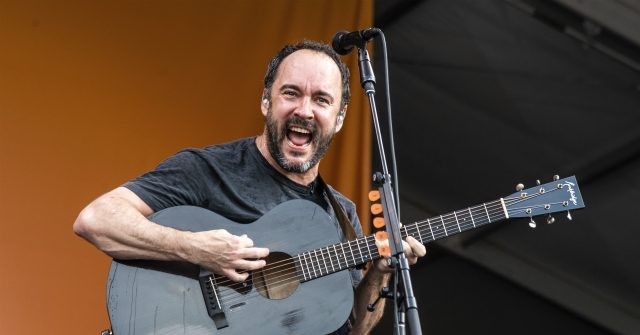 Rocker Dave Matthews suggested in an a wide-ranging exposé about his environmental activism that President Donald Trump sounds like he “wants to damage the planet.”

“Nobody wants to live in the world that’s dying, nobody wants to damage the planet — although sometimes when I hear the president speak I think maybe there’s some exceptions!” Dave Matthews said according to Variety.

The “Don’t Drink the Water” crooner was speaking to the Hollywood trade publication for its expansive piece featuring a list of what it called the “25 Climate Movers and Shakers in Entertainment.”

Variety noted the Dave Matthews Band’s appointment by the United Nations as a Goodwill Ambassador for its Environment Program and how the rock band has spent the last 15 years working with the nonprofit organization Reverb on the BamaGreen Project to promote environmentally friendly tours for musicians around the world.

Matthews, though has a long history of slamming Republicans.

“When I listen to the bold-faced, impossible and nonsensical, disconnected claims at the last debate, I’m like, ‘What the fuck are you all talking about?’ None of you are remotely connected. None of you have an actual plan!” said Mathews, who supported Obama, at the time. “I can stand up and say, ‘If I was President, I would make everybody’s boobs bigger, and I would make men stronger, and everybody would be happy, and everybody would be fed, and the oceans would be clean, and everyone would have jobs. And that’s what I’ll do if I’m President.’”

Jerome Hudson is Breitbart News Entertainment Editor and author of the forthcoming book 50 Things They Don’t Want You to Know, from HarperCollins. Follow Jerome Hudson on Twitter @jeromeehudson.