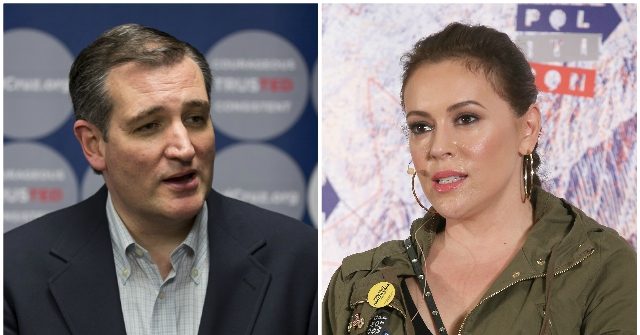 Sen. Ted Cruz (R-TX) schooled leftist actress Alyssa Milano on Tuesday during a gun control debate, arguing that America should do more to combat gun violence but without infringing upon Americans’ right to bear arms.

Milano opened up the debate, explaining that she is “terrified” because she does not know how to keep her family safe from gun violence. Milano said that despite their disagreement on the issue, she believes that with “mutual respect and humility” they can affect positive change in the country.

Fred Guttenberg, the father of Jaime Guttenberg, who was killed during the Parkland, Florida, school shooting, attended the debate as well.

The actress implored Sen. Cruz to “lead” on the nation’s gun violence problem.

Sen. Cruz said during the debate that he supports the Second Amendment, while at the same time proposed legislation that would improve school safety and prevent criminals from obtaining weapons.

Sens. Cruz and Chuck Grassley (R-IA) sponsored the Protecting Communities and Preserving the Second Amendment Act of 2019, which would improve the National Instant Criminal Background Check System (NICS) and bolster alerts to law enforcement. The legislation would also criminalize “straw purchasing” of firearms and gun trafficking, allow firearms dealers to utilize the NICS database for voluntary background checks of employees, and allow firearms dealers to access the FBI’s National Crime Information Center stolen-gun database so that a firearm is not stolen prior to acquisition.

Sen. Cruz said during the debate that the Grassley-Cruz legislation would have helped prevent the mass shooting in Odessa, Texas.

I do not believe in taking away the right of the citizen to own guns for sporting, for hunting, and so forth, or for home defense. But I do believe that an AK-47, a machine gun, is not a sporting weapon or needed for the defense of the home.

The Texas senator added, “the machine gun has been functionally illegal for 80 years, you and I can’t purchase a machine gun.”

“If we can agree the objective is to keep people safe,” then Congress should push for Grassley-Cruz, Sen. Cruz charged.

Guttenberg said he could support Grassley-Cruz if it does complete the objectives he laid out during the debate.

After the debate, Cruz said that his debate with Milano and Guttenberg was “productive and respectful” and that legislation such as Grassley-Cruz could help solve the problem of gun violence.

We could pass these reforms right now and make our country safer. I will continue to work with my colleagues in Congress to do just that.

“We could pass these reforms right now and make our country safer. I will continue to work with my colleagues in Congress to do just that,” Cruz said.

Guttenberg also said he appreciated the conversation with Sen. Cruz.

Thank you @SenTedCruz for inviting @Alyssa_Milano, @DadoftheDecade and I today. You were gracious with the 90 minutes you took for our very candid conversation. I look forward to continuing with it. https://t.co/YSjP8RPxHj

Milano said that she remains unsure whether the confab created progress on the gun control debate, but said she appreciates the conversation.

“I just left. He was gracious. I’m unsure if it changes anything. But appreciative for the opportunity to bridge the divide with civil, meaningful, discussion.”

I just left. He was gracious. I’m unsure if it changes anything. But appreciative for the opportunity to bridge the divide with civil, meaningful, discussion. Link to entire meeting below. #NoRA https://t.co/tAAzPXt5hW