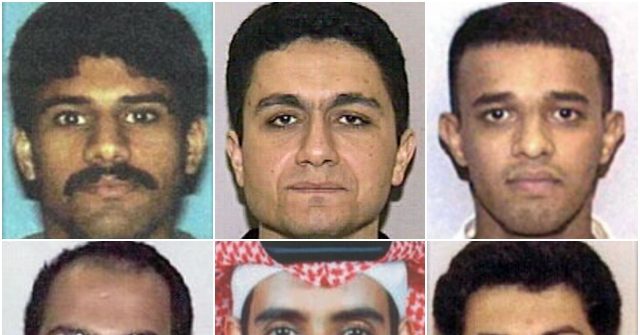 There are at least six million illegal aliens who arrived in the United States the same way seven of the 9/11 Islamic terrorist hijackers came to the country: by overstaying a visa.

All nineteen 9/11 terrorists — who murdered nearly 3,000 Americans and injured more than 6,000 others in 2001 — arrived in the U.S. legally, with 16 obtaining tourist visas and three others obtaining business and tourist visas.

In total, seven of the 19 terrorists overstayed their visas at some point either before the 9/11 attacks or at the time of the attacks and were supposed to be deported, but never were.

Those terrorists who overstayed their visas include:

Eighteen years after the 9/11 terrorist attacks, the loophole where legal immigrants become illegal aliens after overstaying their visas remains fully open, with at least 4.5 to six million foreign nationals living in the U.S. who should have been deported after their visas expired, according to Pew Research Center.

In total, there are roughly 11 to 22 million illegal aliens living in the U.S. at any given moment, and more than 1.2 million foreign nationals are legally admitted to the country every year — like all 19 terrorists were.

Foreign nationals arriving on temporary visas continue to go largely untracked by the federal government despite The 9/11 Commission Report pleading with the Department of Homeland Security (DHS) to implement a nationwide biometric entry-exit system, which would identify legal immigrants who have overstayed their visas and help in deporting them.

As of March, there were more than 415,000 illegal aliens in the U.S. who had overstayed their visas. This includes more than 300,000 illegal aliens who arrived in the U.S. from countries that are not part of the Visa Waiver Program, which allows certain nationals to come to the country for up to 90 days without obtaining a visa. In total, 20 foreign countries have visa overstay rates that exceed ten percent.