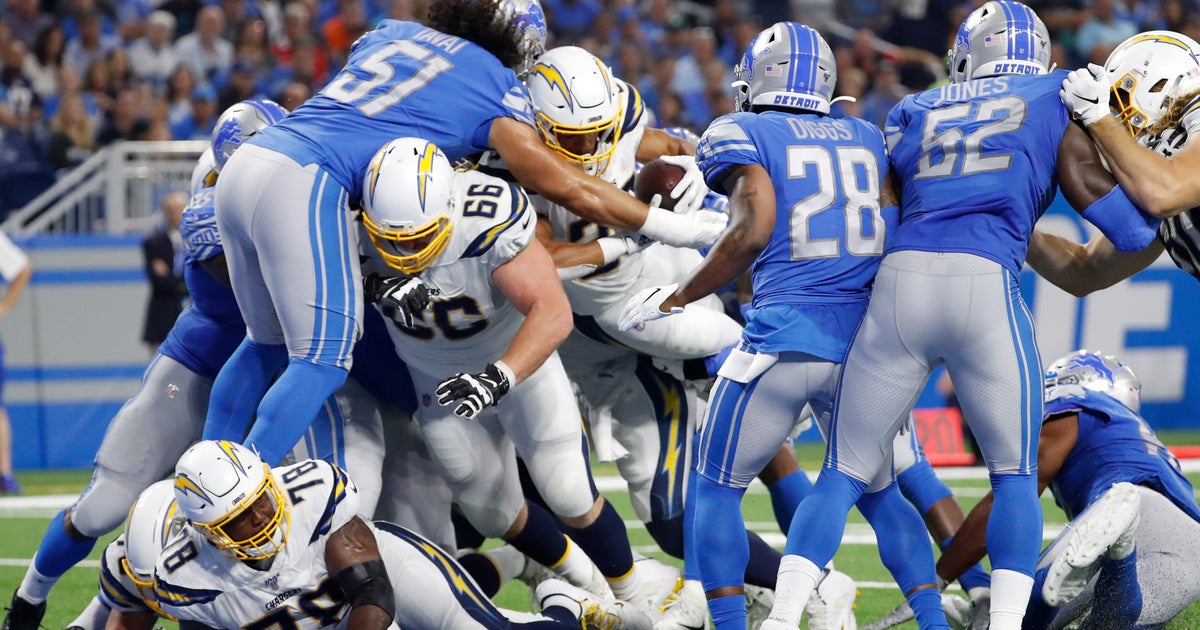 COSTA MESA, Calif. (AP) — Anthony Lynn is starting to pencil in at least one game a year where the Los Angeles Chargers fail to capitalize on opportunities and gift-wrap a victory to the opponent.

The third-year coach is hoping Sunday’s 13-10 loss at Detroit is the only time that happens this season.

“For whatever reason these types of games show up once a year. I don’t like it,” Lynn said on Monday. “We’re a smart football team. That doesn’t happen a lot so it blindsides you when it happens. We normally don’t beat ourselves.”

When it comes to excruciating defeats when a team messes up multiple times, this one was textbook. Los Angeles had two touchdowns called back due to penalties and then fumbled near the goal line in the same drive. It missed two field goals and saw hopes of sending the game into overtime go for naught when Philip Rivers was intercepted in the end zone.

Now Lynn has to get his team to put this loss behind while dealing with a mounting list of injuries. The Chargers had six starters not play against the Lions. The list will grow by at least one this week with safety Adrian Phillips out due to a broken forearm.

The run defense looked more like last season’s. The Chargers yielded just 94 yards to the Lions on the ground after giving up 203 in the opener to Indianapolis.

Los Angeles surrendered just one run over 10 yards and none over 20 after allowing five over 10 yards last week, including two over 20.

“We were much better. We knew they were going to pound it and we held them to 3.4 (yards per carry), which is good,” Lynn said. “The defensive line played well. Joey Bosa and Melvin Ingram made extra efforts to make plays in the run game.”

Austin Ekeler is averaging 4.3 yards per carry and has two rushing touchdowns, but he needs to do a better job with ball security near the goal line.

His fumble at the Lions 1 was his second of the season, including the preseason, in a goal-to-go situation.

“He is a heck of a football player but you don’t want to see patterns,” Lynn said. “The only thing I would fault (on Sunday’s carry) is going over the top on first-and-goal. When you go over top you expose the football.”

Cornerback Casey Hayward was one of four players to go all 61 snaps on defense. His interception of Matthew Stafford’s pass intended for Kenny Golladay was Stafford’s first pick in 162 attempts.

Hayward has 12 interceptions since joining the Chargers in 2016. That is the fourth in the league over the past three-plus seasons.

Ty Long was pressed into double duty again on Sunday due to kicker Michael Badgley’s groin jury and missed two field goals. He had a 39-yard attempt hit the left upright during the third quarter and was wide right from 41 yards in the fourth.

Lynn said Badgley continues to make progress but wasn’t sure if he would be ready for Sunday’s game against Houston.

Phillips will be out for a significant period of time due to a broken right forearm which he suffered during the fourth quarter. Lynn said Phillips would be placed on injured reserve in hopes he could possibly return sometime later this season.

4 — Penalties by the offense on one drive, which ended in Ekeler’s fumble. Justin Jackson’s 60-yard touchdown was nullified by a holding penalty on wide receiver Dontrelle Inman, and a 22-yard Ekeler reception for a score was wiped away by Sam Tevi being flagged for an illegal block.

The Chargers are 1-1 for the second straight season going into Sunday’s home game against Houston. There are no signs of Melvin Gordon ending his holdout soon. The biggest adjustment on defense will be seeing who will replace Phillips at strong safety, with Rayshawn Jenkins and Jaylen Watkins being the most likely.