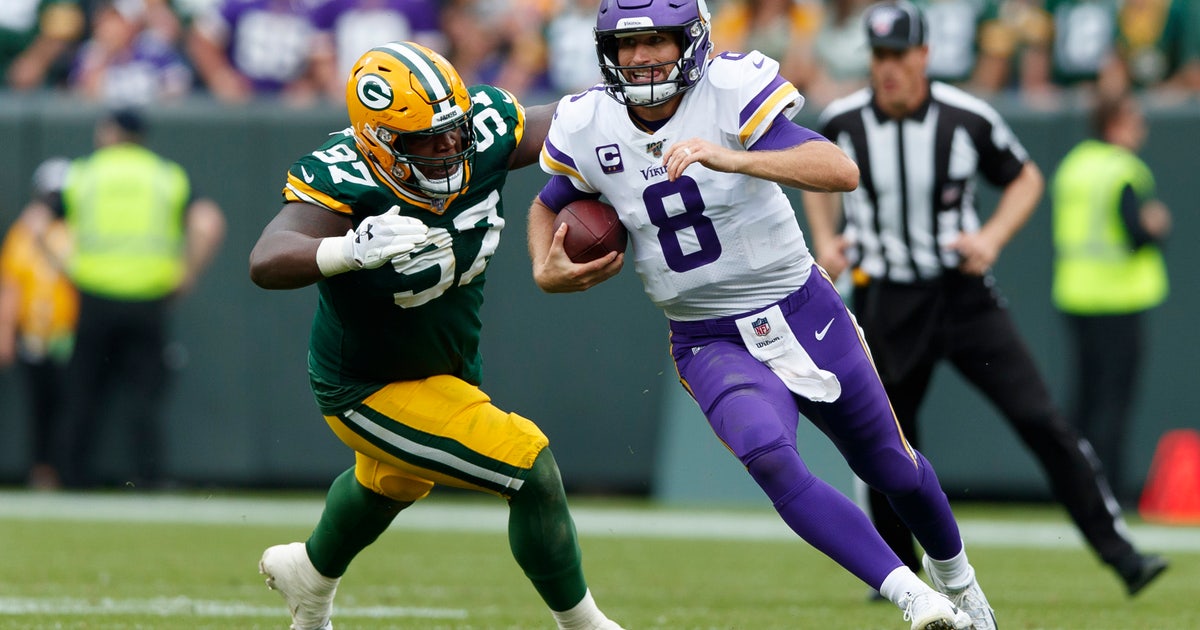 EAGAN, Minn. — Near the end of an already flawed performance, Kirk Cousins and the Minnesota Vikings were in prime position to pull ahead of the Green Bay Packers and make all the cringe-worthy plays that came before moot.

Then Cousins made the mistake of all mistakes, a rookie-like decision to throw off balance toward Stefon Diggs in a crowd after rolling out on first-and-goal and facing pressure by the Packers. Kevin King made the leaping interception in the corner of the end zone, and the Vikings wound up with a most agonizing defeat after a game that was well within their grasp to win.

“It was just a gut-wrenching loss,” Cousins said. “Proud of the way my teammates kept fighting, but very disappointed in my performance.”

The pass was supposed to be beyond the reach of everyone except Diggs. There wasn’t quite enough zip on it to keep it in the safe zone.

“Kind of an ours or nobody’s thing, but it wasn’t nobody’s,” Cousins said.

In his 75th regular-season start, Cousins posted his second-worst completion rate (43.8 percent) as a pro after connecting on only 14 of 32 passes against a spruced-up Packers defense. Two of them were picked off. He lost one of two fumbles that came on consecutive plays in the first quarter. There were also a handful of uncharacteristic overthrows by a ninth-year quarterback who was second in the league last season in completion rate (70.1 percent).

“He’s got all the talent, and we just need to continue to coach him the way we want him to play,” coach Mike Zimmer said after the 21-16 defeat.

The first interception was thrown into traffic, too, when Darnell Savage arrived at the ball as the same time as Diggs. Outside linebacker Preston Smith had dropped back in zone coverage and snagged the deflection. Perplexingly, that turnover immediately followed one of several smart throwaways Cousins did make on Sunday when he saw no openings.

“I just didn’t feel like I did my part,” Cousins said.

Here’s a snapshot of the Vikings after two weeks:

The direction of offensive coordinator Kevin Stefanski with significant input from offensive adviser Gary Kubiak has so far yielded superb results for the running attack behind the new zone blocking scheme. Dalvin Cook leads the NFL with 265 rushing yards.

Not only has Cook displayed the power, vision and explosiveness the Vikings lacked in the 19 games he’s missed to injury over his first two years, but Stefanski has stayed committed to the run, even after falling behind 21-0 to the Packers. That was the main reason Zimmer fired offensive coordinator John DeFilippo last season.

The Vikings have been a disciplined team in six years under Zimmer, but over their first two games they’ve compiled a league-high 200 penalty yards on 19 accepted infractions. Diggs had a touchdown negated by pass interference on Cook that was discovered during the mandatory replay review of all scores, forcing the Vikings to settle for a field goal, and Zimmer bluntly said on Monday he believes that was “a bad call.”

He was less forgiving about the rest of the penalties, though, including unsportsmanlike conduct on Diggs for removing his helmet during the celebration of his third-quarter touchdown catch. That pushed the extra-point attempt back to 48 yards, and Dan Bailey, who earlier missed a 47-yard field goal, had his kick blocked.

“They’ve got to start playing within the rules,” Zimmer said, “and they know the rules.”

The defense stiffened up after a rough start and had Packers quarterback Aaron Rodgers out of rhythm for the last three quarters. Everson Griffen was credited with three hits on Rodgers and applied persistent pressure opposite All-Pro left tackle David Bakhtiari.

Cornerback Xavier Rhodes was mostly assigned to two-time Pro Bowl pick Davante Adams, who had four receptions for 81 yards on four targets in the first quarter alone to help the Packers build their three-touchdown lead. Rhodes also had a 25-yard pass interference penalty.

Cornerback Mackensie Alexander (elbow) was missed. Rodgers went after rookie Nate Meadors for his second touchdown pass, when Meadors was in slot coverage on Geronimo Allison on second-and-goal from the 12 late in the first quarter. Backup safety Jayron Kearse again saw frequent action in the nickel role.

The other significant absence was left guard Pat Elflein (knee), who was replaced in the lineup by Dakota Dozier. Interior pass protection has been an issue for the Vikings since last year, and the fumble Cousins lost was caused in part by heavy pressure by Packers nose tackle Kenny Clark over Dozier and Bradbury.

Minimizing penalties and a return to accuracy for Cousins will be top priorities when the Vikings host the Oakland Raiders next. Restoring cornerback depth will be critical, too, with Alexander sidelined and Holton Hill suspended. Mike Hughes is close to clearance in his recovery from a torn ACL suffered last season.