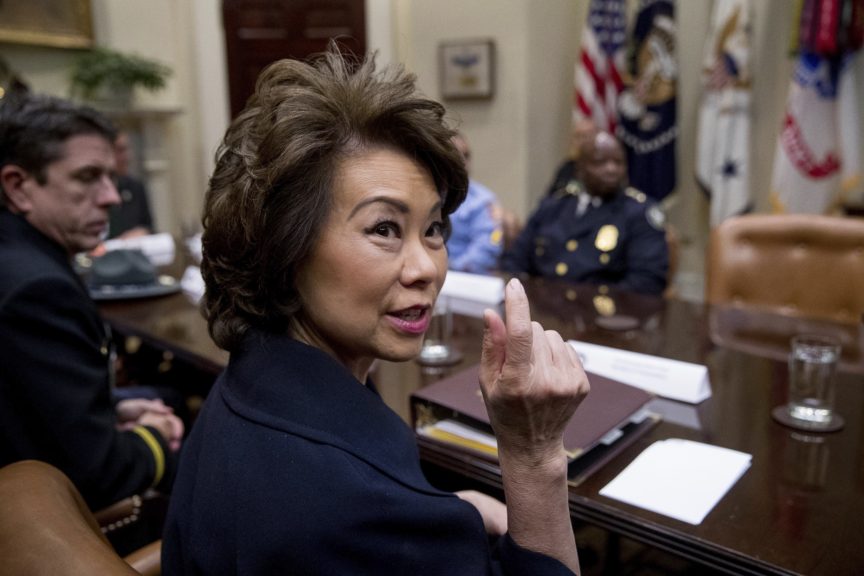 The House Oversight and Reform Committee launched an investigation Monday into whether Transporation Secretary Elaine Chao used her office to benefit herself and her family.

The House Democrat-led committee’s investigation follows from research published in Breitbart News Senior Contributor Peter Schweizer’s bestselling book Secret Empires. Schweizer, as well as the New York Times, has written that Chao “repeatedly used her connections and celebrity status in China to boost the profile [of her family’s shipping] company, which benefits handsomely from the expansive industrial policies in Beijing that are at the heart of diplomatic tensions with the United States.”

The Committee is examining your misstatements of fact, your actions that may have benefitted the company in which you continued to hold shares, and your compliance with ethics and financial disclosure requirements.

A Transportation Department spokesman dismissed the “media attacks” on the secretary and said that the agency would respond to the committee’s letter.

The Department has received a letter seeking information on a variety of topics based on publicly available information and news coverage. We look forward to responding to the Committee’s request. Media attacks targeting the Secretary’s family are stale and only attempt to undermine her long career of public service.

Chairman Cummings’ committee requested that Chao provide documents regarding internal government communications about Foremost Group and Vulcan Materials Company, Chao’s canceled October 2017 trip to China as well an official trip to China in April 2018, her annual public financial disclosure reports, and whether she used a personal email address to communicate with her family or Foremost Group employees about official Transportation Department business.

The Transportation Department canceled a trip to China in October 2017 after State Department officials raised questions over ethics concerns, including Chao’s family members, in meetings with members of the Chinese government.

“Federal regulations prohibit federal employees from using their public offices for ‘the private gain of friends, relatives, or persons with whom the employee is affiliated in a nongovernmental capacity,’” the two House Democrats wrote.

Cummings will also investigate Chao’s “failure to divest of stock in one of the nation’s largest construction companies,” or Vulcan Materials Company, in which Chao served on the board of directors for “nearly two years immediately before becoming Secretary of State.”

The House Democrats’ letter notes that Vulcan’s revenue depends heavily on infrastructure funding “allocated by DOT [Department of Transportation.” The Democrats noted that because Chao was given  “deferred stock” while serving as a director of Vulcan,” she has a “significant and direct personal financial interest in the company.”

Chao did not sell her Vulcan shares until June 2019, after the Wall Street Journal reported that she had yet to divest from the company after promising to sell her stock in the company.