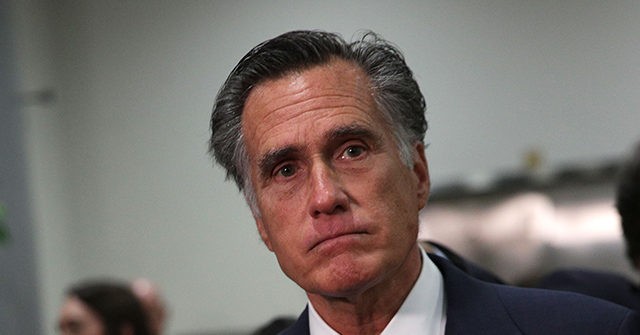 President Donald Trump boasted Monday that he was continuing to drain the swamp in Washington, DC, particularly among “RINO” Republicans.

“I hate to say this, but we have some Republicans, they are not good. You call them a RINO, they are RINOs, they’re RINOs or worse,” Trump said, referring to Republicans derided as “Republicans In Name Only” because of their political alliances in Washington.

The president spoke about moderate Republicans during a campaign rally in New Mexico, noting that the RINOs were worse than many of the Democrats.

Trump said that RINO Republicans were losing relevance in Washington since he became president.

“They are pretty much on respirators. They are gasping for air,” he said. “But we do have some bad people that you wouldn’t believe.”

After several supporters shouted what sounded like the name “Romney,” Trump laughed, and replied, “I didn’t hear you, what did you say? … I didn’t hear that.”

Despite the ongoing back and forth feud between Romney and Trump, the president has reduced his mockery of Romney since he won a Senate seat in Utah.

Romney said earlier this week that he was “not planning” to endorse Trump for president in 2020, or any other candidate.

At one point in his speech, a fly buzzed around Trump’s podium.

“That’s a nasty fly. I don’t like those suckers,” Trump said, adding, “I don’t like snakes too much, we have plenty of them in New York and Washington a different variety … I don’t like either kind of snake.”