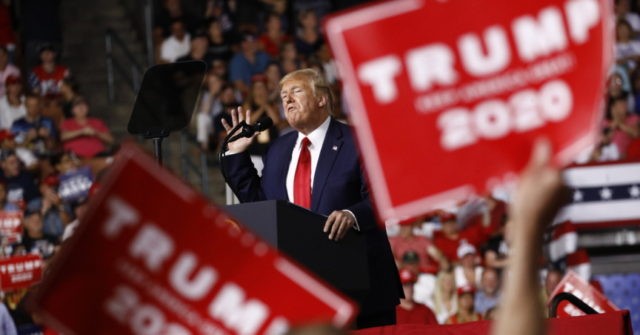 8:35 PM: Trump may need to somehow flip a state like New Mexico given his poor numbers in B1G country.

On my way to New Mexico — see you all shortly at the @StarCenter! #KAG2020 https://t.co/a9V3ULY8bY pic.twitter.com/zRQfrVUVtY

.@realDonaldTrump’s visit to New Mexico tonight is a good reminder that he lost our state by 8 points in 2016.

RT if you think New Mexicans can double his loss percentage in 2020.

Rio Rancho City Manager says there’s about 250 officers from around the state helping out to add extra security for @POTUS visit pic.twitter.com/yUCa2lyPb7

Outside the Santa Ana Star Center. Less than 4 hours until @POTUS visit in Rio Rancho pic.twitter.com/MdIHhybRWL

One of the many signs we’ve seen supporters bringing in ahead of @realDonaldTrump’s visit to New Mexico tonight. Rally set to begin at 7pm @krqe pic.twitter.com/ZCBlPNcXmG

My newest op-ed. Excited to speak tonight from the stage of the Pres Trump rally in New Mexico about the incredible benefits of the #TrumpBoom for Latinos! https://t.co/EhrUbDoDWR pic.twitter.com/IC5aNLy0gG

The line for the @POTUS rally has wrapped around toward the north side of the building. pic.twitter.com/qKIuJqSNuj

A large crowd of @realDonaldTrump supporters have arrived in Rio Rancho. There is also an #Impeach sign on the road to the @StarCenter. @meganrabundis is outside the venue monitoring the action. pic.twitter.com/Goh0bHekxF

Much of the crowd awaiting the @POTUS rally is watching a large video screen out front of the Star Center. pic.twitter.com/pJEvylJi3R

People are already lining up for @realDonaldTrump’s 7 p.m. campaign rally in Rio Rancho – here’s the view from the @StarCenter parking lot. #nmpol pic.twitter.com/bWSmjKkt8d

Before 6:00 AM in Rio Rancho outside Albuquerque, and a mile-long line of traffic headed to @realDonaldTrump #KeepAmericaGreat rally tonight.

Gonna be an amazing night in New Mexico, which the President aims to put in the win column in 2020. pic.twitter.com/RDiAe8qCDq