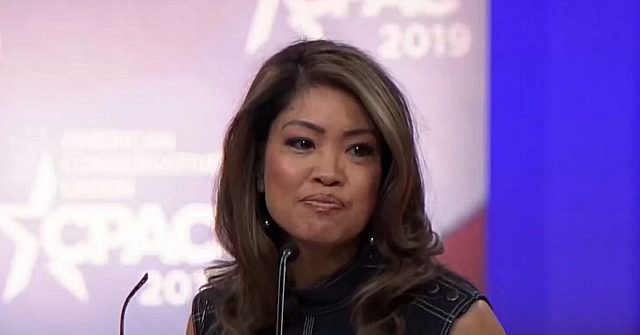 “Corporate America [is] right at the center of Open Borders Inc.,” said Michelle Malkin, referring to a network of interests — financial, ideological, and political — invested in perpetuating the status quo of both legal and illegal immigration. She joined Tuesday’s edition of SiriusXM’s Breitbart News Tonight with hosts Rebecca Mansour and Joel Pollak to discuss her latest book, Open Borders Inc.: Who’s Funding America’s Destruction?, ahead of a scheduled Thursday Senate vote on S. 386, the Fairness for High-Skilled Immigrants Act.

“The hatred by the left and the Democrat Media Complex … as Andrew Breitbart made so clear to people — that nexus, and how they cooperate to foist false narratives. These caravans didn’t just start happening when Trump took office. In fact, for several years now, the media has not paid attention to it,” Malkin said.

Various Catholic organizations are beneficiaries of contracts with the federal government to service refugees, noted Malkin.

“The U.S. Conference of Catholic Bishops, of course, is the biggest bigfoot when it comes to lobbying for amnesty and an unlimited pipeline of refugees because they’re one of the nine holders of those exclusive, lucrative contracts for refugee resettlement,” Malkin said. “The Catholics even have their own social justice arm of lawyers who are down at the border working with other NGOs and Soros-funded groups … who are there to provide know-your-rights-seminars as soon as they greet people at the border.”

Malkin added, “[There are] countless stories of people being coached to supply manufactured stories of persecution to game our asylum system. It’s amazing how this network all works together and how they’re all getting a cut of it.”

“There’s a huge financial incentive on the part of every Silicon Valley company to widen the pipeline of cheap labor,” Malkin stated. There is a mutual complementarity of interests between certain corporate concerns and left-wing employee cohorts, she noted. “For them, it’s IT workers and H-1B [visas], which is the subject of my last book, Sold Out, but also, there is an ideological imperative, and you see that now, where you’ve got — internally —  thousands of employees who are pressuring CEOs to cut off any IT contracts with anyone related in any manner to the Department of Homeland Security.”

Malkin remarked, “[Some mostly black] neighborhoods in South-Central Los Angeles have been supplanted by illegal alien gangs, and the brown-black divide in South-Central L.A. is just something you’re not supposed to talk about, but that impact of communities just being completely transformed — not by choice, but by demographic overwhelming — is now happening across the country.”

A primary national security lesson to be drawn from the Islamic terrorist attacks of September 11, 2001, assessed Malkin, is the need for vigilant screening of foreigners seeking entry to the U.S.

“The 18th anniversary of the 9/11 terrorist attacks should’ve reinforced the most important lesson that all it takes is a teeny tiny minority of foreign menaces to wreak massive havoc on our safety and civil order,” Malkin said, noting her latest book’s documentation of  “60 [cases] involving refugees who came in claiming persecution of some kind … who then turned around and resettled here, only to plot or wage war on Americans — stabbing, bombing, you name it, and that’s just 60, and they’re from all over the world.”

Malkin contrasted the ethos of multiculturalism with that of assimilation and integration.

“We now have the Twin Cities in Minnesota that have been completely transformed, again, without any sense of global input or control [over] the redistribution of hundreds of thousands of  — primarily — Somali Muslims who have no allegiance to the country,” Malkin remarked. “It’s the danger of [an absence of] any kind of assimilation imperative like the one that was the foundation of how my parents came here, and so many other previous generations of immigrants who had to demonstrate some sort of fealty to basic constitutional principles and Western values.”

Malkin shared her observations of ICE detention facilities for migrants. “Some people would be astonished to know that the amenities at an ICE facility — like the ones run by GEO — feature special iPad compartments for the illegal alien detainees, ping-pong tables, [and] gyms. I mean, obviously it’s not a walk in the park, but when you have illegal alien criminal detainees who have free access to LexisNexis and state of the art technology, by the way … as well as, by the way, psychiatry appointments. The idea that these places are concentration camps just defies reality and history.”

“I think it’s do-or-die,” said Malkin of the issue of immigration, “and it is not hyperbole to call it the most existential threat to our country, the ability to determine who gets in, what those numbers should be, what it looks like to hold employers accountable who are breaking the law.”

“This is about securing a permanent Democrat ruling majority,” concluded Malkin of the aforementioned coalescence of interests she dubbed, “Open Border Inc.”