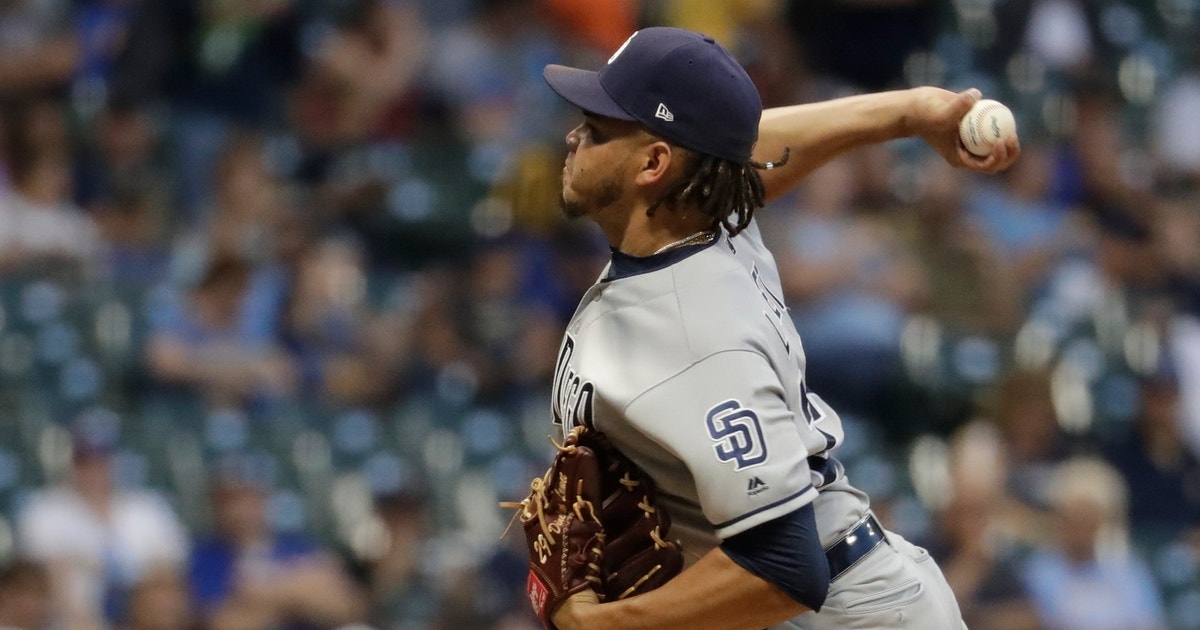 MILWAUKEE (AP) — Dinelson Lamet struck out a career-high 14 and Kirby Yates fanned pinch-hitter Ryan Braun with a runner on second base to close out the San Diego Padres‘ 2-1 win over the playoff-contending Milwaukee Brewers on Wednesday night.

The Brewers, who had won four in a row, began the day tied with the Cubs for the second NL wild-card spot.

Yates took over took to begin the ninth and walked Eric Thames to start the inning. With one out, pinch-runner Tyrone Taylor strayed too far off first base on a popup to shallow left and nearly got doubled off, but was hit in the back by Mejias-Brean’s throw. Taylor went to second on the shortstop’s throwing error, and was stranded when Yates struck out Braun for his 41st save.

The Brewers appeared to score the tying run on a fluke play with two outs in the seventh inning, but it was not allowed. With Cory Spangenberg on third base, Trent Grisham swung and missed at a third strike that wasn’t caught cleanly. Grisham was called safe when first baseman Eric Hosmer dropped the throw from catcher Francisco Mejia, with Spangenberg crossing the plate.

But after a brief discussion among the umpires, it was ruled Grisham had kicked the ball, apparently inadvertently, on his way to first and that made it a dead ball and a strikeout.

Lamet (3-5), who missed the entire 2018 season after undergoing Tommy John surgery, repeatedly hit 97 mph. He struck out five of the first six Milwaukee batters — three of them on three pitches each. Lamet pitched six innings, giving up three hits.

After giving up his first hit of the game, a single in the third inning to Greg Garcia, Brewers starter Adrian Houser (6-7) reached for his back and the game was stopped while he stretched and was examined by the team trainer. He remained in the game.

The next batter, Mejias-Brean, in his 11th career at-bat, hit his first career home run. The drive, on an 0-2 pitch, hit the top of the wall in right-center field and gave San Diego a 2-0 lead.

Keston Hiura connected off Lamet in the sixth for his 17th home run of the season.