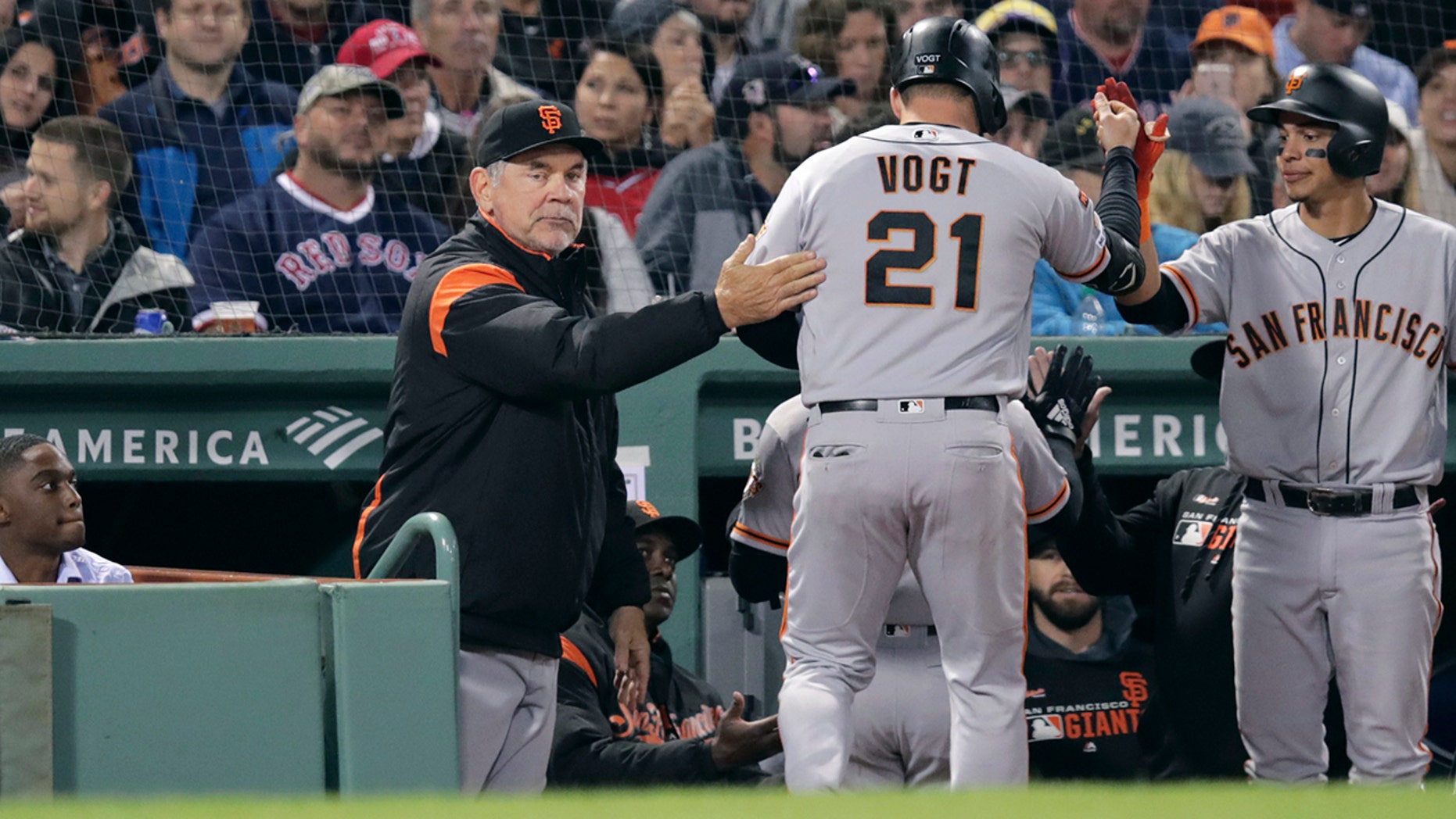 San Francisco Giants’ Stephen Vogt (21) gets a pat on the back from manager Bruce Bochy, left, after his sacrifice that scored Kevin Pillar during the eighth inning of a baseball game against the Boston Red Sox at Fenway Park in Boston, Wednesday, Sept. 18, 2019. (AP Photo/Charles Krupa)

The San Francisco Giants helped manager Bruce Bochy reach yet another milestone before his retirement at the end of the season.

San Francisco’s 11-3 rout of the Red Sox on Wednesday night was Bochy’s 2,000th career victory as a manager in the majors.

“I’ve been lucky. I’ve been blessed to have been doing this this long. That’s what it means.” Bochy said.

Fans who stuck around Fenway Park were chanting Bochy’s name at the end and Boston manager Alex Cora saluted from the opposite dugout, knowing the significance of what Bochy has achieved in 25 years of managing.

“That number just represents so many people, more than anybody are those players. Hopefully when they hear that number, they realize what a big part they had to do with it. It doesn’t happen without them.”

The Giants broke out champagne in the clubhouse for a postgame celebration, which included a few understated remarks from their beloved skipper.

“It was actually pretty relaxed and very Boch-esque. Just gave a little speech and said what he always says — how much he appreciates the guys. And we know that, so that’s why we play so hard for him,” said Jeff Samardija, who took a no-hitter into the sixth on Bochy’s big night. “You don’t want to let him down. When you have that respect for a manager, the team shows up every night and is always competing.”

Bochy won 951 games while managing the San Diego Padres over 12 seasons and is 1,049-1,047 in 13 years with San Francisco, which won three World Series titles with Bochy at the helm.

“At this level that’s kind of like unreal. I think everybody that gets to do this job wish they could last that long and be able to do what he has done throughout his career,” Cora, who is wrapping up just his second season as a manager in the majors. “The way he’s gone about the business. I mean, he’s been amazing, so congratulations.”

The Giants helped Bochy reach 2,000 with just 10 games remaining in the season. The 10 other managers to win 2,000 are all Hall of Famers and Bochy is sure to follow.

Samardzija didn’t allow a hit until the sixth inning and the Giants gave him plenty of offense, tagging eight Boston pitchers for 15 hits while winning for the second straight night at Fenway Park. San Francisco blew the game open with two runs in the eighth and five more in the ninth and will try and complete a three-game sweep of the interleague series Thursday afternoon.

Stephen Vogt hit a two-run homer in the first and finished with four RBIs for the Giants. Samardzija (11-12) pitched six innings, holding Boston to one run on two hits and four walks. He struck out two.

The Giants capitalized quickly on control issues by Boston starter Jhoulys Chacín, who was tagged for three runs in the first inning and didn’t make it through the third despite striking out six.

Chacín (3-11) was in trouble from the start with a walk to leadoff batter Mike Yastrzremski, followed by a Brandon Belt’s double to left-center. Kevin Pillar drove in Yastzremski on a fielder’s choice and Vogt lined a two-out homer off the Pesky Pole to give the Giants a 3-0 lead.

Brandon Crawford’s RBI double in the third put San Francisco up 4-0, which was plenty of cushion for Samardzija, who didn’t allow a hit until Devers’ homer with two outs in the sixth.

Enderson Franco made his major-league debut when he started the ninth for San Francisco. He allowed Bradley’s homer, which bounced off the top of the Green Monster and was initially ruled a triple before being overturned after a video review.

Yastrzemski hit an RBI single in the ninth, one night after homering in his first game at Fenway, where his Hall of Fame grandfather, Carl, played 23 seasons with the Red Sox. Carl Yastrzemski, Boston’s beloved “Yaz,” threw out the ceremonial first pitch Wednesday night.

Red Sox: Cora said LHP David Price (cyst left wrist), who hasn’t pitched since Sept. 1, will have surgery on his left wrist and is done for the season. “We’re going to shut him down,” Cora said. “It’s a head start to next year and a smart thing to do.” . OF Mookie Betts missed his fourth straight game with inflammation in his left foot. Cora said Betts could return as DH this weekend when the Red Sox visit Tampa Bay. . IF Sam Travis was under the concussion protocol after getting hit in the head by a throw while sliding into third Tuesday night.