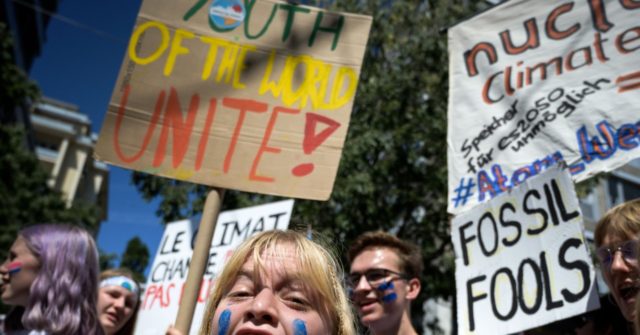 NBC News is prompting Americans to confess their climate change transgressions as part of a project titled “Climate Confessions.”

As Democrat presidential candidates – as well as prominent members of Congress, such as members of the far-left “Squad” – continue to push aggressive forms of the Green New Deal, NBC is paralleling their concerns by encouraging Americans to anonymously admit their climate change faux pas.

“Even those who care deeply about the planet’s future can slip up now and then,” NBC’s “Climate Confessions” reads.

“Tell us: Where do you fall short in preventing climate change? Do you blast the A/C? Throw out half your lunch? Grill a steak every week? Share your anonymous confession with NBC News,” it adds.

Willing confessants can express their remorse in one of six categories– plastics, meat, transportation, energy, paper, and food waste.

Some of the confessions appear to be genuine in nature, with many anonymous individuals expressing guilt for air travel and excessive Q-tip usage.

“My sister had a lot of metal straws but I thought they were annoying so I threw them out,” one user wrote under “plastics.”

“I travel often to conferences (flying). I think about the emissions + try to justify it with, ‘the plane is going there anyway,’” another user admitted.

Someone else confessed that they fly on private jets and “often burn an extra 500 gallons of fuel to save 10 minutes.”

“I use enough Q-tips for a family of 8. I have an addiction to them in hygiene purposes, makeup application, even cleaning,” another individual confessed.

“I LOVE meat. But I love the earth more. Vegan for over 4 years now,” another bragged.

However, the confessions did not just come from genuinely guilty parties. Many of the “confessions” came from individuals who openly oppose the left’s climate change agenda, and they used the platform to mocked NBC’s effort.

“I would rather the whole planet burn than give up steak,” one user wrote. “Kick rocks hippies.”

“’Confessions’” implies I have something to feel guilty about. I don’t. I only conserve electricity to lower my power bill,” a user explained, with another adding, “I run my AC 24/7. I’m not going to sweat to appease this climate religion.”

Some users decried the left’s virtue-signaling on meat consumption, writing, “I think the climate has always been changing, and I’m not going to stop eating meat because of cult-like manipulation by the left.”

“I require at least half a roll of TP when wiping,” another confessed.

NBC’s project follows the left’s recent push to aggressively push a climate change agenda. On Wednesday, teen climate change activists – including Greta Thunberg and Jamie Margolin – appeared before a joint hearing before the House Committee on Foreign Affairs and Select Committee on the Climate Crisis and decried the U.S. for not doing enough to combat what they say is the looming threat of a climate catastrophe.

“Solving the climate crisis goes against everything that our country was unfortunately built on — colonialism, slavery, and natural resource extraction. This is why the youth are calling for a new era altogether,” Margolin, a Seattle native, told lawmakers.

She also declared that her generation should no longer be known as “Generation Z,” replacing it with “Generation GND.”

“It is right here, testifying before you, that I am proud to announce the history is being made,” she declared. “You’ve heard of the Reagan era, the New Deal era. Well, youth are bringing about the era of the Green New Deal.”