LAREDO, TEXAS — Acting Customs and Border Protection Commissioner Mark Morgan accused “reckless” members of Congress of lying in their attacks on agents on the ground who are enforcing U.S. immigration law — saying it is hurting morale and lawmakers should instead get to work fixing the loopholes in the immigration system that he says are responsible for the crisis at the border.

“When you’re there every single day and you’re risking your lives and you’re doing so with humanity and compassion and yet the very people who are elected leaders are attacking your character, yeh sure it has an impact on morale,” he said in an interview with Fox News this week between meetings with agents at the border. “That’s what they tell me and the leaders in the field are saying the same thing.”

Morgan, who has served in both the Obama and Trump administrations, did not mention any lawmakers by name or party affiliation, but referred to comments made by Rep. Alexandria Ocasio-Cortez, D-N.Y., who has described detention centers as “concentration camps” and has accused officials of forcing migrants to drink water from toilets.

When he recalled those remarks, Morgan became visibly angry at what he called the “lies” being aimed at agents on the frontlines of the crisis — and didn’t hold back in his criticism of those responsible for spreading the claims.

He noted that CBP has conducted more than 4,000 rescues this year — something he says isn’t publicized by the media enough — as agents risk their lives in treacherous waters and blistering 110+ degree heat to save the lives of migrants trying to enter the U.S. He gave one harrowing story of cartel smugglers who, seeing CBP agents approaching, threw a paraplegic man into the river so they wouldn’t be apprehended. Agents quickly dove into the water and saved the man’s life.

“You never hear about that, instead you hear these lies that they’re running concentration camps or they call them Nazis,” he said. “But let me ask you this — If we’re an organization full of Nazis, how do you explain 4,000 rescues? How do you explain the countless individuals that come to our custody sick or with pre-existing life-threatening conditions and we do everything we can to save their lives — and that’s what gets me so frustrated about our own elected officials,” he said. 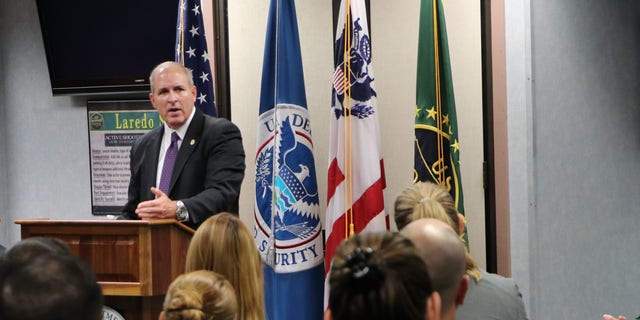 “If they don’t like it, change the laws. But instead, because they can’t do their job, because they can’t get their act together to do what they need to safeguard and secure this country, they vilify the men and women of Customs and Border Protection, and that’s outrageous, it’s reckless and it’s irresponsible,” Morgan said.

Morgan’s remarks came after The New York Times published a story outlining Border Patrol’s “morale crisis” that detailed how morale has plummeted amid the myriad of attacks against them, including how agents have to pick their restaurants carefully when in uniform in case someone spits in their food.

Agents interviewed by the Times spoke about how their job had also gone from stopping drug smugglers to taking care of children and giving them formula as the nature of the crisis at the border has changed. Morgan told Fox that agents know that when they are pulled off the frontlines, it is making the U.S. less secure.

“They know every minute they’re pulled away to take care of a child, to order baby formula, to change diapers, to act as a quasi-social worker in an environment for the kids and families, they’re pulled off the frontline and they know bad people and bad things are getting through,” he said. “But they would still do that and do that with pride, what really gets them at the end of the day its that vitriol, that rhetoric that’s coming from Congress that’s attacking who they are and their character, that’s what really gets morale down.”

Morgan was one of a number of administration officials who was in Laredo this week to meet with officials and visit the Migrant Protection Protocol (MPP) courtrooms that allows asylum seekers to stay in Mexico while their cases are processed.

It’s one of a number of measures taken by the Trump administration that officials are crediting for a sharp drop in border apprehensions. In August 64,004 migrants were apprehended at the border, a number that officials say is still too high but marks a 56 percent drop from the highs of May.

Additionally, efforts to build more miles of wall on the southern border, something that many agents say is a top priority in places such as Laredo, are underway. The administration is promising that the pace of construction is increasing and that as much as 500 miles of new wall will be built by the end of 2020.

But with those measures taking effect, officials are keeping their attention on Congress, saying that laws to close loopholes in the law are needed in order to stop the pull factors that are still enticing migrants to make the dangerous, and often deadly, journey north.

When asked what he wanted Congress to do specifically, Morgan didn’t need a moment to think, quickly rattling off a series of measures he says are needed at the frontline: a permanent fix to the Flores court settlement that limits how long children can be detained, changes to the Trafficking Victims Protection Reauthorization Act (TVPRA) that prevents the U.S. from returning some children to their home countries, a fix to the “credible fear” barrier for asylum claims, and for enforcement agencies to be given more funding to do their jobs.

But given the sharp partisan divide in Washington, Morgan isn’t hopeful that agents will get any help from the halls of Congress any time soon.

“They could do that in 15 minutes on one page if they would actually get together and do their job,” he said. “But they won’t. I’ve spoken to many of them and they’re telling me its not going to happen and that’s what’s so frustrating.”