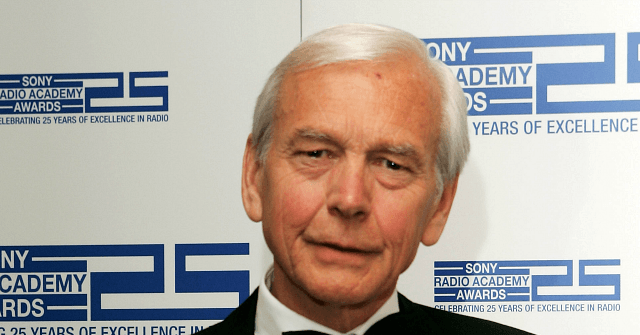 Mr Humphrys expressed his relief at being free from “the BBC Thought Police” which he claims has “tried to mould the nation into its own liberal-Left image”, despite the broadcaster’s notional legals requirement to remain balanced and impartial, in memoirs which are being serialised by the Daily Mail.

The 76-year-old Welshman revealed the BBC’s “[great] fear of the politically correct brigade and the most fashionable pressure groups — usually from the liberal Left, the spiritual home of most bosses and staff”, and how the “disaster” of the British people’s vote to Leave the European Union in 2016 — against the advice of the left-neoliberal establishment — sent them reeling:

“The morning of the EU Referendum was different. Leave had won — and this was not what the BBC had expected. Nor what it wanted.

No nods and smiles when the big bosses appeared. No attempt to pretend that this was anything other than a disaster.

Their expressions were as grim as the look on the face of a football supporter when his team’s star player misses the penalty that would have won them the cup.”

Humphrys, though he voted to Remain in the European Union himself, said the result “exposed a fundamental flaw in the culture of the BBC”, and that “Its bosses, almost to a man and woman, could simply not grasp how anyone could have put a cross in the Leave box on the referendum ballot paper.”

He suggested that the public broadcasters was similarly out of touch on issues such as mass migration, and how the efforts of Robin Aitken, a senior BBC journalist, to put together a dossier highlighting the way the corporation had fallen into a “Left-wing agenda [which] was ‘wholeheartedly and unashamedly pro-EU’” were met first with silence and then with an instruction to “f**k off”.

“There is, I believe, a groupthink mentality, an implicit BBC attitude to what makes news,” Humphrys opined, suggesting its “institutional liberal bias” was not so much a product of conspiracy as of its tendency to recruit middle-class liberal arts graduates–” a disproportionately large proportion of whom had been to private schools” — trained by left-wing academics.

“This may explain why the BBC sometimes fails so badly to spot a change in the nation’s mood — in hugely important areas,” he added.

“Immigration was one of them.”

Humphrys is not the first BBC veteran to highlight the corporation’s bias — although for his part Humphrys believes it is still a “force for good” overall — with Peter Sissons, who presented the BBC Nine O’Clock News and the BBC Ten O’Clock News for a decade, having alleged that a left-wing “mindset” was “At the core of the BBC, in its very DNA” in 2011.

“By far the most popular and widely read newspapers at the BBC are The Guardian and The Independent,” he revealed, referring to two major left-wing, europhile outlets.

“Producers refer to them routinely for the line to take on ­running stories, and for inspiration on which items to cover,” he said.

“In the later stages of my career, I lost count of the number of times I asked a producer for a brief on a story, only to be handed a copy of The Guardian and told ‘it’s all in there’.”

BBC Tells Schoolchildren There Are ‘Over 100’ Genders https://t.co/tBSMfj0VX8