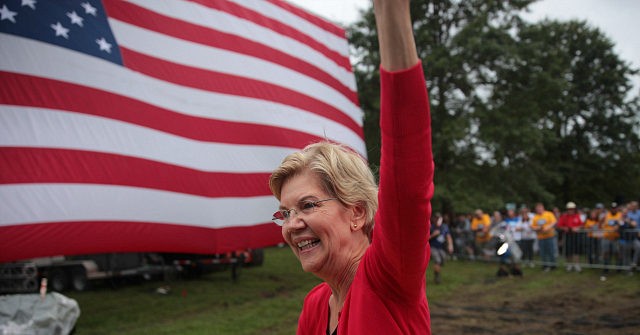 Less than a year after Sen. Elizabeth Warren (D-MA) declared herself vindicated for being less than two percent Native American, the former Harvard University professor is leading in multiple state and national polls for the 2020 Democrat nomination for president.

In the most recent Des Moines Register/CNN/Mediacom poll out of Iowa, Warren took the lead with 22 percent of Democrat primary voters for the first time. Former Vice President Joe Biden, meanwhile, fell to second place with 20 percent, while Sen. Bernie Sanders (I-VT) trailed in third with 11 percent.

Warren had led hugely against her Democrat contenders in an Iowa Starting Line-Change Research poll from August. In that poll, Warren surged past Biden and Sanders by 11 points, earning nearly 30 percent of support overall.

Since the second Democrat presidential primary debate on September 12, Warren’s Real Clear Politics average of Iowa polls leads all other candidates with 23 percent. Biden comes in with 20.3 percent average post-debate in Iowa, while Sanders garners 12 percent.

Warren’s surge in Iowa, though, has been met with confrontation from some farmers in the agricultural state who vehemently oppose the Green New Deal, which she has endorsed. In one conversation, an Iowa farmer confronted Warren over her support for the plan, which he said would cripple his industry because of its goals to eliminate cows.

It’s not just Iowa where Warren is surging. Across the country, Warren has steadily climbed over Biden and Sanders to take the lead.

In an Economist/YouGov poll taken in the second week of September, Warren tied with Biden nationally with each taking 26 percent of Democrat primary voters. Sanders, at third, came in at 16 percent.

Even in California, where Biden has led the pack in most statewide polls, Warren took the lead in the latest Change Research poll, getting 25 percent compared to Biden’s 23 percent. At stake in California for 2020 Democrats are about 416 delegates.

Warren’s recent taking the lead in key Democrat primary states and polls has come after embarrassing mishaps in which she formally apologized to Native Americans for spending years claiming to be Native American herself. Those critics, though, have been reluctant to accept her apology, as Breitbart News noted.

Similarly, in August, Warren’s campaign claimed that 12,000 people were in attendance at her rally on the campus of Macalester College in St. Paul, Minnesota. The maximum capacity of the venue, though, is about 3,000 people, and with crowd spillover, there could not have been more than 6,000 attendees.

In New Hampshire, Warren’s campaign claimed there were 700 people in attendance at a rally on a farm. Breitbart News was there and judged the crowd at about “over 300.”

Built mostly on the perception of a grassroots populist campaign, Warren’s run for president has seen her take on multinational corporations for outsourcing American jobs and promising an economic patriotist agenda even while using billionaire donor money and pleasing the donor class by taking a mass illegal and legal immigration position.

Despite her anti-establishment messaging, Warren has reportedly been in talks with Democrat Party establishment figures like failed presidential candidate Hillary Clinton and has received praise from former Senator Harry Reid. One Democrat strategist told NBC News that Clinton has been impressed with Warren’s campaign thus far.